The Big Four by Agatha Christie 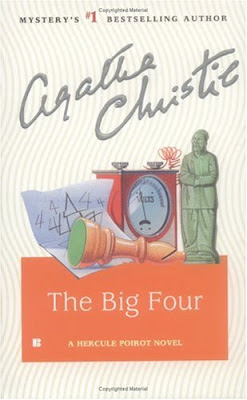 Hercule Poirot has had his share of intruders-yet none more peculiar than the emaciated stranger covered in mud who stumbles into the detective's apartment, shout half-crazed warnings about "the Big Four," and dies. But not before plunging Poirot into a crazy netherworld of international intrigue, secret weapons, kidnapped physicists, underground laboratories, hairbreadth escapes, and an employee from a local insane asylum who's all too eager to let the baffles Belgian in on the sinister secret of "the Big Four".

To be honest when I started this book, that is only 198 pages long, I thought it would be a quick read. Unfortunately it took me two days to get through it, simply because I didn't like it.

You already know I'm a huge Christie fan, hence the whole reading all her books in order, so I'm always a little sad when I come across one that I could do without. As you can tell from the synopsis this one had too much going on for such a short book. Each chapter felt more like a short story that was rewritten to go with a bunch of other short stories. The main threat of "the Big Four" which was the sole continuing thread throughout the book just didn't come off as credible. The Big Four are a quartet of super genius criminals bent on world domination. The only problem was that they were boring and one dimensional. It almost reminded me of a rejected plot for a old Charlie Chan movie.

The only redeeming quality for me was the return of Hastings, our narrator from the first few Hercule Poirot books. He always paints Poirot in a light I find more agreeable. Poirot still comes across as egotistical, but somehow Hastings softens that image and makes Poirot more human to me. For this reason alone I'm glad I read the book, I just wouldn't recommend it to anyone else.

This book will fall under two different challenges, other than my own Agatha Christie self challenge, Thriller & Suspense Challenge 2010 and Typically British Reading Challenge 2010 both of which are hosted by the wonderful Carolyn of Book Chick City.

Charlie Chan movie??? Egads...I really do appreciate your honest thoughts on this one Ryan. I had every intention of reading these in order too but now I'll have to remember to skip this one!! I like Hastings too...I didn't realize that he disappears in a few books. Great and insightful review!

It sucks that not every book by a wonderful author is a home run. Here's to reading better books by Christie.

Christie wrote a lot of books, and some are definitely better than others. I think she lives on as one of the best selling mystery authors because of her great characters and relatively uncomplicated mysteries.

Most of the books are pretty short, so it's amazing we can keep all the characters straight. She has to have quite a few to keep us trying to guess "whodunnit," but the books are never confusing or bogged down with surplus information. If there is a sentence that seems insignificant, you can bet it's an important clue.

This wasn't one of my favorite books. To tell the truth, I love David Suchet's Poirot but in the books I'm partial to Miss Marple and Mr. Parker Pyne. In The Big Four, I also felt as if Christie was writing a Charlie Chan story. But it was fun to meet Poirot's brother! (Shades of Mycroft Holmes!)

I have a soft spot for ole Hercule, even with his ego. I'm going to start the Agatha Christie books this year too...finally!

My grandmother was a huge Christie fan. I read a lot of her books in high school because of that. This wasn't one of them, though. I, too, have a soft sport for Hercule...

I really should read me some Christie!!

BTW, did you win?? I did! My playoffs ended last week, and even a couple poor performances by Brees didn't stop me!!

I had once read a book of Agatha Christie. I don't remember the name , but I didn't like it at all.Since then, I never read any of her books(wrong on my part to judge an author like this) !!
But, I really don't know what I should say;am I glad or its too sad that you didn't like this book.

I am doing a Marple-Holmes-Poirot challenge, so thanks for the review, I think I'll skip this one!

I grew up reading Agatha Christie and I absolutely love her books. I haven't read one in a while though and recently started again thanks to the Thriller & Suspense Reading Challenge. I haven't read the Big Four though, so can't share my thoughts on this one. Btw, I'm a Poirot fan!

Thanks for the "heads up" on this one. I'm currently reading my way through the Christie canon (slowly since I'm supposed to be reading for my dissertation), and now I'll know not to expect this one to be up to the usual standards.