Her Royal Spyness by Rhys Bowen 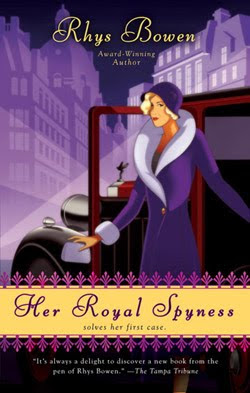 Synopsis From Back Cover:
My ridiculously long name is Lady Victoria Georgiana Charlotte Eugenie. Thirty-fourth in line for the throne, I am, as they say, flat broke. When my brother Binky, cut off my meager allowance, I bolted from Scotland-and my engagement to Fishface (I mean, Prince Siegfried)-for London, where I have:
a) built a fire in the hearth-entirely on my own, thank you very much
b) fallen for an absolutely unsuitable Irish peer
c) made a few quid housekeeping incognita, and
d) been summoned by the Queen herself to spy on her playboy son
Less than thrilled with this last bit, I'm wondering what to do when an arrogant Frenchman-who was trying to swipe our family estate!-winds up dead in my bathtub. Now, my new job is to clear my very long family name...
I first heard about this book from Deb at Bookmagic and she gave it such a good review (which I will link once I find it) that I asked for it for Christmas and I got it. As you can tell from the synopsis Georgie is a fun, engaging character that not only do you enjoy reading her story but you almost want her to jump off the page and hang out for a day. I rarely ever fall for a character this quickly but Georgie is just so much fun. She has a sense of self that you rarely find in fiction or in real life for that matter. She knows who she is, it's that simple. There is no illusion or pretense to her.
As far as the story goes, it quick and fun. I managed to read the book in one sitting simply because I didn't want to stop reading it. It had me engaged from the start. Once Georgie arrives in London, she finds herself unemployed with no money and a big old house that she doesn't know how to run. She has no servants to clean or take care of her so she ends up boiling water and giving herself sponge baths to clean up and eats as little as she can get away with.
The rest of the books is a fast paced whirlwind. She meets Mr. Darcy O'Mara, a penniless Irish Peer who she can't help but be attracted to even when she thinks he may be the bad guy and runs into her old school friend Belinda Warburton-Stoke, a budding fashion designer who is living way beyond her means. Both of these characters are well written and you find yourself wishing they could join Georgie in jumping out of the story. They and the other supporting characters add to the book. There is not badly written or un-needed character which is a refreshing change.
The mystery itself, the whole point of the book, is cleverly done and well mapped out. After finding the dead man in her bathtub, Georgie does what she can to protect her brother, who has come under suspicion, and find the real murderer. After several near death experiences, including a near drowning, a fall down the stairs, and a falling statue; Georgie uses her brain and quite a bit of luck to solve the case.
Now this is were my real only problem with the mystery aspect of it appears. I figured out who the killer was way, way before Georgie did. Normally, this would ruin the story for me as I like a book that surprises me by the killer's identity but I will forgive this book and this author for that. The villain is so much fun and whiny at the end that you can't help but get a chuckle out of it.
The is a light, quick read that is so well done that I almost wished there was more to it. I didn't want to the book to stop and I'm really looking forward to the rest of the books in the series.
This book will qualify for the Thriller & Suspense Challenge 2010.
Posted by Ryan at 8:14 PM

I love historical settings and mysteries so I have had my eye on this one for a while now!

This sounds like a fun read.... love the description!

This does sound like a fun and great book. I think I missed this review by Deb. Or maybe it was before I started blogging. I am going to have to go back up and check out your link.

Glad to see you enjoyed it as well.

Another great review! Boy, you're really doing a lot of reading lately.

This sounds great, perfect for the T&SRC!

This reminds me in a way of Wodehouse's Jeeves books - have you read any of them? It sounds like a lot of fun and it will definitely be going on my TBR list!

This does sound like fun and something a bit different for the T&S challenge. Another one for the ever growing list!

I'm glad you liked it! The next 2 in the series are a bit longer which is nice. I love Georgie and her Granddad!

Sounds like a really fun book, I can't wait to hear what you think when you read more in the series.