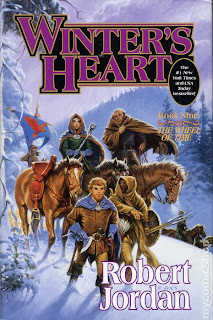 Rand is on the run with Min, and in Cairhien, Cadsuane is trying to figure out where he is headed.  Rand's destination is, in fact, one she has never considered.

Mazrim Taim, leader of the Black Tower, is revealed to be a liar.  But what is he up to?

Faile, wit the Aiel Maidens, Bain and Chiad, and her other companions, Queen Alliandre and Morgase, is prisoner of Sevanna's sept.

Perrin is hunting desperately for Faile.  With Elays Machera, Berelain, the Prophet, and a very mixed "army" of disparate forces, he is moving through country rife with bandits and roving Seanchan.  The Forsaken are ever more present, and united, and the man called Slayer stalks Tel'aran'rhiod and the wolfdream.

In Ebou Dar, the Seanchan princess known as Daughter of the Nine Moons arrives - and Mat, who has been recuperating in the Tarasian Palace, is introduced to her.  Will the marriage that has been foretold come about?

There are neither beginnings nor endings to the turning of the Wheel of Time.  But it is a beginning....

I would say that Winter's Heart, which happens to be book nine of the Wheel of Time saga, is the funnest book in the series to read, but then I would by lying.  It's actually very long, and full of long drawn out stories, most of which don't really play out until the next book in the series, Crossroads of Twilight.  However, it could be worse.   A lot of the action in both books, happen at about the same time.  So theoretically, it could be one massive book instead of one.  I will say this about Winter's Heart, a lot of what happens in this book, has serious consequences later on down the road.  One thing Robert Jordan was very good at, is layering his plots in such a way that repercussions may not happen until much later in the series.  With all that being said, I still enjoyed the book more than I have the last few times I read it.

I forgot how much I love Perrin.   Here is a man that has changed so much from the first book.  He has grown up in ways that Mat and Rand have not.  The hand he has been dealt, even more so than Rand, has fundamentally changed him in ways that he doesn't even begin to realize until now.  The lengths he goes through to rescue Faile proves it more than anything else.  One little item before I move on from Perrin, I can't stand the whole Luc/Isam/Slayer storyline.  It never really works, nor does it really come together into anything that is interesting.  I'm sure I'll bring it up later on in the reviews, but it's one of those side story lines I wish had never happened.

Faile is one of those characters, much like Min and Aviendha, that I can really enjoy at times, and others I really don't understand the point of their characters.  Fails, at this point, since she is away from Perrin, is starting to come into her own as a character and as a leader.  She is growing stronger in herself, now she just needs to get away from the Shaido Aiel in one piece.  I don't like the way she is manipulating on of the Aiel men, but I understand the reasons why.

Elayne is having fun trying to strengthen her hold on the Lion Throne.  When I say fun, I'm being sarcastic.  She is having to deal with rebellious nobles who don't support her claim to the throne.  A rebellion that has more to do with the way Morgase acted when she was under the control of Rahvin.  She has the backing of the strongest noble, Dyelin Taravin, and is well on her way to securing the throne.  Despite some of the dumbness her pregnancy brings on, she does show some genius in the way she is manipulating the many factions around her.  I'm really getting tired of Birgitte though.  She seems to be becoming a one note character.

Rand, I love him, but he is still going around, acting without thinking.  He spends a lot of the book hunting down the Asha'man who turned against them.  He drags those with him all over the place.  I know he has a purpose, but it's so frantic, that it feels as if he is just reacting, not planning.  What he does at the end though, changes everything.  Cleansing Saidin is a game changer.  His relationship with Casuane Melaidhrin is one that is so badly mishandled by all involved that I'm surprised that they haven't come to blows yet.

Mat and Tuon.  Can I just say I hate the idea, that I never warm up to it, and I wish Tuon would be dropped down a well and forgotten.  I even like her "servant" Selucia more than I like her, and I can't stand her either.  Actually, I hate the Seanchan on principle and wish they would all go away.  The same goes for Egeanin, and Bayle Domon by connection.  Add in Seta, Renna, Suroth, Alivia, and every other slave/slave owning one of them.  What they do to people is horrific, look at Amathera as an example.  Once, she was a ruler, now she lives in fear, prostrating herself to every Seanchan she sees.  I'm just glad Juilin took an interest in her and is trying to bring her back to what she was.  The Seanchan are all bat shit crazy, and the entire race needs to be destroyed.

Mat on the other hand, I love him more and more.  His relationship with Olver is one that never stops surprising me.  He acts the father and the big brother all in one, and it's fun to see.  He is growing as a hero, sticking his neck out on a regular basis, because it's the right thing to do.  He tries to protect Tylin, even when she treats him as a plaything.  By the way, I hate what happens to her, though it allows Beslan to come into his own.  He, Mat, rescues two leashed Aes'Sedai when he escapes Altara, even though he could have left them behind.  He has taken care of his Band of the Red Hand, making sure his troops are given everything they need.  He is coming into his own as a general to be respected and feared.

Other Books In the Series:

I so love your enthusiasm for this series....seriously!!

Between you and Blodeuedd... I'm going to have to start this series one day. You know I will... just not when. :D