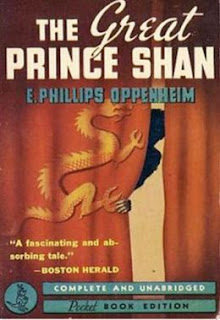 The central figure of this absorbing story is the mysterious and cultured Prince Shan, ruler of China; the heroines are captivating English girl and a exotically beautiful Russian who pit their charm, their loveliness, and their wisdom against each other and against the highly-trained diplomats of many countries.  Each of them attempts to influence the decision which may change the map of the world.

A few of them, like Nigel and Maggie, understand the dangers they face.  They can see what's happening in Europe and Asia, happenings that look very bad for England.  With the help of a few smart Americans, Chalmers and Jesson, who see the danger as well, they learn of a meeting between Prince Shan of China, Nadia Karetsky of Russia, and Oscar Immelan of Germany.  What is to be decided at that meeting could destroy England for all time.  What they can actually do about it, nobody is really sure.  They come up with a plan to find out what's going on, but it's a plan that gets interrupted by the human connections that take place between the various characters.

But even then, the characters and the nations they represent will need to answer some questions. Will Maggie be able to convince Prince Shan to not go along with Germany's plots?  Can Nigel and Nadia find themselves on the same side, or are they destined to be enemies?  How will Oscar Immelan react when he find out things are starting to go the opposite of what he wants?  How many people need to die to protect England from it's enemies, and how can Nigel and Maggie stop what seems to be the inevitable?

This is a book that explores a lot of political fears and hopes swirling around the world between the two World Wars.  It's a mystery book, but it's much more than that.  It's an exploration of the doubts many felt in putting faith in The League of Nations, and in the fear some felt in the growing power of certain countries after the end of World War I.  It's a fear born out of the opening of the East, and in the Nationalism on the rise in certain countries.  But it's also a story of hope and love.  It's story that convinces it's reader that no matter what you face, either personally or globally, the individual can make a difference.

I am kind of all what? when it comes to this book

I don't know if I'd like this book, but it's an interesting premise.