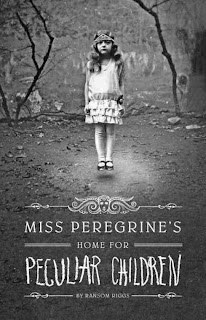 A mysterious island.  An Abandoned orphanage.  A strange collection of peculiar photographs.

As our story opens, a horrific family tragedy sets sixteen-year-old Jacob journeying to a remote island off the coast of Wales, where he discovers the crumbling ruins of Miss Peregrine's Home for Peculiar Children.  As Jacob explores its decaying bedrooms and hallways, it becomes clear that Miss Peregrine's children were more than just peculiar.  They may have been dangerous.  They may have been quarantined on a deserted island for good reason.  And somehow - impossible thought it seems - they may still be alive.

I'm not sure if I've ever mentioned it before, but I'm really good at ignoring those books that everyone else seems to be reading.  I will probably never read The Night Circus, Water for Elephants, or The Hunger Games books.  I'm the same when it comes to movies and even a lot of the music that comes out anymore.  I'm not sure it's something I've ever really done on purpose, but I tend to avoid them like the plague.  I think it helps that for the most part, they never sound like books I would want to read anyway.  I'm really bad when it comes to most YA titles that I see being reviewed all over the place.  I hate to say it, but I think I actually turn my nose up on most of it.  I'm not proud of that last fact, but it's an instant reaction anymore.

All that being said, when Miss Peregrine's Home for Peculiar Children first starting showing up, I'll admit that I was a bit intrigued by the cover and the premise of the book.  It does fit into my rather odd tastes, despite it being a YA book.  The last time a YA book knocked my socks off, was when I read Rotters by Daniel Kraus.  It blew me away, and while the two books have widely different concepts, they both explore some of the darker aspects of human behavior and the lengths we will all go through to find home.

I wish I could tell you that this book blew me away the way Rotters did, but I can't.  And honestly, I'm not really sure any YA book really stands a chance of matching the way I reacted towards that one.  That's not to say I didn't enjoy this book, because I had a lot of fun reading it.  It just won't be life changing or all that memorable to me.  I do want to say, that I enjoyed it enough to want to read the next book in the series once it comes out.  It was an interesting look at what it means to be human, and how appearances are rarely what they appear to be.

Now granted, all that exploration is done through some rather fanciful and contrived character exploration  The whole premise, of writing a book around a set of pictures, is a little too forced at times.  It stilts the action in places, and I'm not sure it really serves any sort of character development.  It seems as if some odd choices were made in order to fit the story around a certain pictures, instead of trying to find a picture to fit where the author wanted to take the story.  I think it hurt the way I felt about the characters, which never really allowed me to invest in any of the secondary children, and barely kept me interested in Jacob.  It's really the themes and undercurrents that saved the book for me, and allowed me to enjoy the book despite it's inherent flaws.
Posted by Ryan at 12:00 AM

I love this book! I can't wait for the sequel actually.

I must admit though that I picked up this book because I thought it was a horror novel, with all the creepy pictures and everything. I was surprised that it's a YA adventure novel at heart.

Well I'm not sure you convinced me to read it anytime soon, even though I've already bought it because of that intriguing cover (my bad) but ... you have convinced me to search for Rotters LOL

I think you don't read the "hot" books or see the "hot" movies because deep down inside you're an old soul. This book does sound like fun.

Yea, I felt the same way! I wanted to love this book to pieces, but I did find myself enjoying it quite a bit. I love the creativity within the book even though it didn't blow me away. I also want to read that next book. :)

I enjoyed this book but there are so many better books out there. I will have to try Rotters and I'm sad you've dismissed The Night Circus, it's wonderful and not YA

Yeah, I agree. I loved the concept but it seemed a little forced sometimes. Still, I'd like to see what Riggs comes up with for the second book.

Hi Ryan, great review. I've heard a lot about this novel but I'm not a big fan of the YA Genre either. It's still on my list somewhere in the future.
deb

I like this book.. but not sure if I will move onto the second book in the series. The whole creating a book from the pictures the author found is pretty clever though. I always wonder.. do people see the book and go "hey.. That's ME!"

So it sounds like this is a book that I might pick up to read...if I should find it at the library sale. Good but not one I want badly enough to pay full price for. Kind of like the way I think about movies - rent or go to theater.

I do have a copy of this one and hadn't realized it was fantasy....hope to try it soon.

I actually enjoyed this one, but HATED way it ended.

My dad just gave me this book to read, so I was interested in what you thought of it. I think I might check out Rotters first!