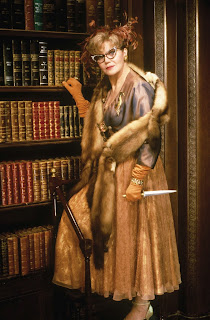 I still remember the first time I saw Clue, the movie not the game.  I had already been playing the dame for years, and while I knew about the movie, I had never seen it.  I came on cable during a rainy weekend, and I decided it was time to watch it.  It was love at first viewing, and a lot of that had to with with Eileen Brennan's portrayal as Mrs. Peacock.  Eileen Brennan was able to bring a world weary feel to her characters, a feat a lot of actresses have tried, but rarely ever pulled off.  She was hilarious in the movie, and next to Madeline Kahn, gives one of the best performances in it.

She is just as terrific in Private Benjamin, actually she is the only reason I liked that movie, The Last Picture Show, and Stella.   And while I love comedies, I normally don't like send ups, but her performance in Murder by Death steals the show.

She passed away on July 28th, 2013 from bladder cancer.  She had previously survived breast cancer and a car plowing into her as she was walking out of a restaurant.  She was a class act, and I'm going to miss seeing her on the screen.  It's a good thing I already own Clue on DVD.

I didn't realize she's passed away. This makes me so sad.

Thanks Ryan. I remember her well. what a great character actress she was

I loved her in Murder by Death and Clue. She's brilliantly funny in both of those.

I missed this! I didn't know she passed. Wow. Sad. Thanks for letting us know.

Loved her! In addition to all those movie roles you mention she did a great turn as Jack's exasperated acting teacher on six episodes of Will & Grace. And one of her last movie roles as the eccentric Cat Lady in Jeepers Creepers is one of the reasons I like that horror movie so much. RIP Eileen. They don't make 'em you anymore, that's for sure.

I had not heard that Brennan had passed away. Her unique style will be missed.