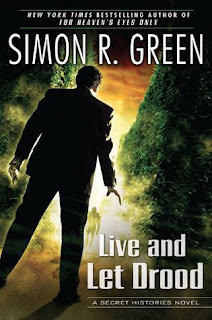 The name is Bond, Shaman Bond.  Better known as Drood, Eddie Drood.  Yes, I'm one of those Droods - the family who've been keeping the forces of evil contained in the shadows for as long as humans have walked the earth.

Recently I suffered a slight case of death, but thanks to Molly, my best girl (who happens to be a powerful witch), I got over that right quick.  Unfortunately my family wasn't so lucky.  In my absence, Drood Hall was destroyed and all my relatives were killed.  Which left me as the last of the Droods.

I didn't much like being the Last Drood.  I can tell you - and then I realized that things weren't as they seemed.  Someone had activated a dimensional engine, sending my Drood Hall off to an alternate Earth, replacing it with a burnt-out doppelganger.  My family is still alive out there.  Somewhere.

And nothing's going to stop me from finding them....

If you couldn't tell by now, I'm frickin in love with all things Edwin Drood.  This series can go on for as long as the James Bond franchise has, and I would be on cloud nine.  The stories get more elaborate and outlandish as they go, just like the Bond movies.  There are wonderful toys, over the top villains, and more humor than a marathon of old Laugh-In repeats.  This is a series that never takes itself too seriously and has just the right level of snarky wit, even Oscar Wilde would find himself easily entertained.

The last few books have started almost as soon as the previous on ended, and Live and Let Drood is no exception.  We are transported back into Eddie's world, within second of the last visit.  He has just arrived back at the Hall to find it destroyed.  His family is presumed dead, though the reader will notice a very significant lack of bodies .  It's takes a bit, but our Eddie finally realizes things aren't as they appear to be and he swears to find his family and bring them back.  Of course, he also swears vengeance on those responsible for the event, if he can figure that out.  But with his Molly, The Wild Witch of the Woods, by his side, that should be a piece of cake.  The problem is, getting to the man responsible, is easier said than done.

There is also the added bonus of Eddie's past coming back in a huge way by the end of the book.  Characters that were once thought to be dead, are suddenly resurrected and dropped back into Eddie's life.  Their return causes a whole new set of issues to be dealt with, some of them will have consequences for Molly as well.  It will be interesting to see how this new wrinkle changes Eddie in further books.

The Man With the Golden Torc
Daemons Are Forever
The Spy Who Haunted Me
From Hell With Love
For Heaven's Eyes Only
Posted by Ryan at 8:49 PM

Ryan, thanks for the reminder. I have been meaning to read some of Simon R. Green's fantasy and sf books for a while now.

I recently added Simon R. Green to my wish list, as I've read a couple of his short stories that I quite liked, and I'm a sucker for gritty urban fantasy.

Gotta get started on this series, by the looks of it.