The Resurrectionist by E.B. Hudspeth 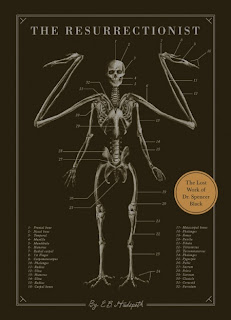 Philadelphia, the late 1870s.  A city of gas lamps, cobblestone streets, and horse-drawn carriages - and home to the controversial surgeon Dr. Spencer Black.  The son of a grave robber, young Dr. Black studies at Philadelphia's  esteemed Academy of Medicine, where he develops the unconventional hypothesis: What if the world's most celebrated mythological beasts - mermaids, minotaurs, and satyrs - were in face evolutionary ancestors of humankind?

The Resurrectionist offers two extraordinary books in one.  The first is a fictional biography of Dr. Spencer Black, from a childhood spent exhuming corpses through his medical training, his travels with carnivals, and the mysterious disappearance at the end of his life.  The second book is Black's magnum opus: The Codex Extinct Animalia, a Gray's Anatomy for mythological beasts - dragons, centaurs, Pegasus, Cerberus - all rendered in meticulously detailed anatomical illustrations.

I'm really at a loss on how to start this review.  The bigger problem, once I do get it started, I'm at an even bigger loss on where to go from there.  And I'm really flabbergasted on how I would finish it off.  I really don't know what to say about this one.  I loved it, I was disappointed in it, I loved it some more, and then it sat on my shelf waiting to be reviewed.  And therein lies the confusion I'm feeling.

The love started off with the concept of the book.  The idea of creating a book around a fictional doctor who went over the deep end and decided that humans are descended from mythological creatures, it's pure genius.  Then making that same doctor start experimenting of animals and humans in order to recreate those creatures, just brings it over the top.  The first half of the book is this imaginatively, convoluted story of a man who takes a once promising career, and descends into madness.  It's also the weakest half of the book, hence my disappointment. 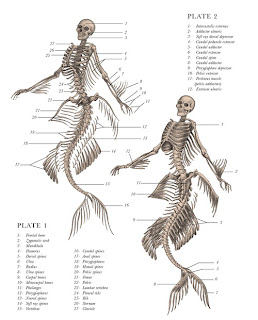 Since it's a fake biography, I wanted the narrative to convince me that Dr. Spencer Black was in fact a real person.  I wanted to become so engrossed in the story of his life that I would be able to forget he never existed.  That never happened.  I'm not sure I can really pinpoint the issues I had with the story itself.  Some of it was the pace of the story, it was a bit jarring in places.  I also think it was the fact that none of the characters around Dr. Black were fleshed out enough to provide a support system for his story.  The pieces, which were there, never fit together. 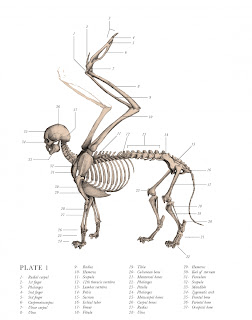 And then the magic happened.  When the codex starts, all the problems I had in believing the reality of the "biography", were forgotten.  The anatomical details and the gorgeous way they were rendered by the artist, made me really believe that these creatures existed.  They even came close to having me convinced that there could have been link between us at some point in time.  I was, and still am, in awe of the details the illustrator was able to bring out in the creatures.  If I could, I would love to have some of them enlarged, framed, and hung on my wall.  I loved this section of the book so much, that had I written the review right away, it would have been glowing.  I waited though, and that changed my outlook on it.

In the end, I'm just not sure the codex was able to overcome the issues I had with the "biography."  I'm a reader, and I'm a reader that wants to get lost in the story.  I want to be able to willingly suspend my disbelief and get transported to another place and time.  I want to forget that I'm reading a fiction book.  And sadly, that never happened for me.  Had this been just a picture book, it would be my favorite of all time.  As it is, it's going to sit in a permanent home on my shelves, and I'm sure I'll pull it out and look at the wonderful illustrations.  I'm just not going to revisit the first half again.

Very unique book.
I had the same issues with League of Somebodies and had a difficult time writing my thoughts on it.

You did a great job, the illustrations look fantastic.

This is such a unique storyline but I'm not sure I could suspend disbelief. The illustrations are awesome!

I have this one and will need to review it at some point. The part about the unbelievable bio is what worries me in these type of books. I also love the illustrations in this book. I've already parused those! LOL

I cannot wait to read this book. I requested the library to order it and they never did and then finally I saw it on the "on order list" and they didn't even bother to add my name. So I added it and now I am just waiting for it to come in. This book looks fascinating to me!