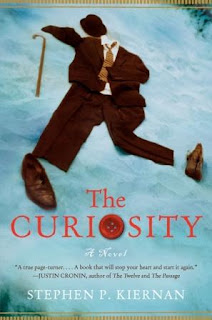 Dr. Kate Philo and her scientific exploration team makes a breathtaking discovery in the Arctic: the body of a man buried deep in the ice.  As a scientist in a groundbreaking project run by the egocentric and paranoid Erastus Carthage, Kate has brought small creatures - plankton, krill, shrimp - "back to life."  Never have the team's methods been attempted on a large life form.

Heedless of the consequences, Carthage orders that the frozen man be brought back to the lab in Boston, and reanimated.  As the man begins to regain his memories, the team learns that he was - is - a judge, Jeremiah Rice, and the last thing he remembers is falling overboard into the Arctic Ocean in 1906.  When news of the Lazarus Project and Jeremiah Rice breaks, it ignites a media firestorm and massive protests by religious fundamentalists.

Thrown together by circumstances beyond their control, Kate and Jeremiah grow closer.  But the clock is ticking and Jeremiah's new life is slipping away.  With Carthage planning to exploit Jeremiah while he can, Kate must decide how far she is willing to go to protect the man she has come to love.

A gripping, poignant, and thoroughly original thriller, Stephen Kiernan's provocative debut novel raises disturbing questions about the very nature of life and humanity - man as a scientific subject, as a tabloid plaything, as a living being: A curiosity.

I don't know if any of you have payed attention to this before, but see that last paragraph, the one just before this one, I normally don't include those when I'm typing up the synopsis.  Partly because I find it to be part of an opinion by someone who is not me, rather than being an actual part of the synopsis.  And partly because, it's just too much typing for me.  I already take up more than my share of blog space, so why add to your reading.  Of course there are those who have claimed I'm lazy for not writing my own, but quite frankly, I think my thoughts belong in the review itself.

But I'm digressing, so let me get back to the point I was trying to make to begin with.  The reason why I chose to include that last paragraph, was pretty damn simple.  I won't go as far as saying it's a big fat lie, but I will say it's a little grandiose for what the book actually read to me.  I'm not sure where the thriller part comes in, unless they are talking about the last few pages where Kate and Jeremiah are running away from the paparazzi.  And while I may agree that the book does touch on the themes of medical ethics, faith, what it means to be alive, and the state of our media driven culture; I can't say as if they seemed to be overarching themes that the author was trying to explore.  Instead the felt as if they were a small part of the story, a story of a man brought back to life and those around him who for various reasons are trying to exploit him in one way or another.  And it's a story of two people, who despite the obvious differences find themselves connecting in ways they didn't see coming, nor fully act upon that connection.

I don't want you guys to think I'm critiquing the book, because I'm not.  The book itself, despite a slow start, was an engaging read that once it got a hold of me, I was hooked.  I fell in love with Jeremiah.  Of all the characters in the book, he was the one that felt the most real to me.  He is one of those characters that had I a huge Edwardian country home, he would be a frequent guest.  He was a man who came of age in a period of time where everything was new, where his contemporaries were exploring far flung lands and new inventions seemed to spring up all over the place.  His was a time of true human expansion and progress was achieved by brave men and women who put their blood, sweat, and tears into everything they did.  He was one of the youngest district court judges in history, and his intellect is one to be admired.  Add in the fact that he is gorgeous, kind, and a truly good person, and you almost have the perfect man.  And despite all that, he never seemed to be the stereotypical romantic hero, there was something grounded and real about him as a character.

I could go on and on about Kate as well, but at this point in time, I think I'm taking up way too much of your time already.  She is the perfect instrument for Jeremiah to see this new world through.  She is a truly interesting character, that while I may not have fallen for her in the way I did Jeremiah, I was never bored when it was her turn to tell the story.  She had her own voice, and it was one that I found myself respecting and in many ways admiring.

My love affair with the character ends there though.  The other two characters who narrate this story are one dimensional bores that I could have done without.   Dr. Carthage is what he is described to be in the synopsis.  There really isn't much more to say about him, other than I felt as if the whole reference to his father felt a little forced and seemed a bit out of place.  The sleazy reporter, was like Dr. Carthage, a one dimensional character that despite his good nature, I never liked, and I just wanted him to shut up.  And it's in how we get to know these character that I think this book did have one major flaw.

The book is told, after the events are already over, from the viewpoints of those four characters.  So while I may have loved half of the chapters, the other half were just flat out annoying to read.  I think this story, and these characters, would have been served better by having the story told by a third person narrator.  It would have allowed more page time for the two characters I loved, but wouldn't have fragmented the story itself in such a way that I found myself annoyed with certain chapters and truly enjoying others.

My last quibble, and then I promise to shut up, I've been trying to convince myself to be happy with the ending, and I just can't be.  It felt a little rushed, and despite some of the differences Kate has made in her life by then, it just doesn't satisfy me.  I can't tell you what I wanted, without telling you what didn't happen, so I'm sorry about that.  I didn't hate the ending, but I think I could have liked it so much better had it been closed a bit differently, though I think the actual end result would have been the same.  And now that I'm done talking in circles, and if you are still reading at this point, please take the time to get this book.  I'm almost positive, and while I won't name names, I'm pretty sure I know which of you would fall for Jeremiah just as hard as I did.

I would like to thank Trisha of TLC Book Tours for the opportunity to read and review this book.  Please visit the tour page to read other reviews.

The wonderful group at TLC Book Tours have generously offered my readers the chance to win a copy of this book for themselves.  The giveaway will last until 11:59 pm, CST, on 7/20/13.  You must be a resident of the United States to enter, and all you have to do is leave me a comment with your email address.
Posted by Ryan at 11:41 PM

Don't count me in for the giveaway as I am overseas. I like the storyline - fantastic as it may seem. Nothing seems impossible these days.

Something about that cover bothers me and I don't know what. It sounds like the book is worth reading, though. Thanks for your review.

Hi Ryan and thanks to your TLC tour group for the contest.
I love the cover
deb
dhaupt3 (at) gmail (dot) com

This sounds really different. Would love to read it, thanks.

Looks like an interesting book. Thanks for your review. As always, I love reading your reviews.

This intriguing book would be great. Thanks. saubleb(at)gmail(dot)com

What an interesting giveaway. Many thanks. elliotbencan(at)hotmail(dot)com

Sounds like a very exciting book. I have never read a thriller any thing like this book, so I would love to read it. Thank for this chance.

I really enjoyed this book (http://manoflabook.com/wp/?p=9108), I thought the story was well told and unlike you, I enjoyed Eras­tus Carthage's characterization.