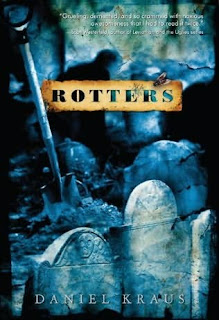 Grave robbing. What kind of monster would do such a thing? It’s true that Leonardo da Vinci did it, Shakespeare wrote about it, and the resurrection men of nineteenth-century Scotland practically made it an art. But none of this matters to Joey Crouch, a sixteen-year-old straight-A student living in Chicago with his single mom. For the most part, Joey’s life is about playing the trumpet and avoiding the daily humiliations of high school.

Everything changes when Joey’s mother dies in a tragic accident and he is sent to rural Iowa to live with the father he has never known, a strange, solitary man with unimaginable secrets. At first, Joey’s father wants nothing to do with him, but once father and son come to terms with each other, Joey’s life takes a turn both macabre and exhilarating.

Since I started book blogging back in 2009, I don't think I've ever been happier to not be a paid reviewer.  If I were, I think I would be racking my brain for days for something to say about this book that would be worthy of being paid for it.  I'm not sure I'm capable of ever expressing how much I loved this macabre blend of my childhood fears of being buried in the ground along with all the adolescent pain and longing for home that so many of us experience.

When Joey's mother dies in a freak accident, he is cast aside by the state and forced to go live with a father he never knew he had, let alone wanted.  He is set adrift in a new town, without his best friend, and forced to deal with a father that seems to be not only cold but just so happens to be the town pariah.  Unfortunately for Joey, this is one case where the sins of the father comes crashing down on the son.  When the kids in his new school find out who his father is, he is never allowed to know a day of peace ever again.  Relentlessly bullied, he is forced to withdraw further and further into himself in order to not feel the pain the building isolation is forcing upon him.  When he does take that all too painful step of reaching out, even in the smallest way, those who reached back are punished by his tormentors.  This causes Joey, like so many others, to continue to pull within himself in order to deal with the pain.  He is a young man who has lost his home and his identity which is enough explanation for what comes next.

Part of Joey's problem is the way he smells.  For weeks, he has been living in what can be called a shack, if you want to be generous about it.  He can't wash his clothes or from what I could tell bathe all that often either, there is such a cloying stench of decay in the house, that it seeps into his pores and never really leaves.  The stench and stigma that comes with it though are fitting, it's almost like the outward symptom of what is happening inside of him.  Between the horrific changes that ripped him away from the only home he knew and the constant pressure squeezing him at all times of the day, the slow decay of his soul and spirit match up with the sweetish, pungent odor of death.

Is it any wonder that when Joey discovers his father's secret, he grasps at that world with all the strength he has left.  Maybe in the world of rotting corpses, long nights, and constant death; Joey will be able to find a place to call his own once again.  His father, reluctant at first, takes Joey under his wing and starts teaching him about the world of grave robbing.  His father, like many before him, view the life in an almost noble, romantic way.  By the time he is done with him, Joey feels the same way.  They are serving a higher purpose by what they do, even it it's misunderstood by the general populace.

Now if this book was just about grave robbing, as seductively written as it was, I'm not sure I would have loved it as much as I did.  The world of grave robbing though served a bigger purpose.  It served as a comparison for what happens, all to often, when life rips away someone's identity and sense of self worth.  This was a book about a young man who loses everything and through some rather unconventional ways discovers more about himself and his family than he ever wanted to know.  By the end of it, and there is some great action I never even hinted about in the middle, he has picked up the pieces and has maybe found that balance within himself once again.

Now if 6 months ago you would have told me that I was going to read a YA book about grave robbing, written by an author I never heard of before, I would have told you to go away.  It wasn't that I would be turned off by the idea, instead I wasn't sure a YA author could pull it off.  It sounds more like something Poppy Z. Brite would do, and better than anyone else.  Now that I've read Rotters though, I can happily say that Daniel Kraus holds his own against Brite, who was really the first author I read that could make this type of topic both seductive and mesmerizing to the point I would not be able to stop myself.  I don't think she could have told this story any better.

Rotters is a story of the desire we all have to be somewhere we feel "at home."  It just happened to be told in such a way to keep me up at night with nightmares of a digger in the future bringing up my body and mutilating my corpse for the treasure buried with me.  I've always wanted to be cremated, this book cemented that decision in stone.  This was a world of pain, yearning, and rotting flesh that I would never hesitate to visit again.
Posted by Ryan at 1:00 AM

Email ThisBlogThis!Share to TwitterShare to FacebookShare to Pinterest
Labels: Horror, Reviews, YA

This is an excellent review, Ryan! I really think you served the book well. This is definitely one that I'm going to have to pick up.

Holy cow, that sounds amazingly creepy, but in a good way!

I don't know that I'll be reading this, Ryan, but it's a helluva of a review. Good work. :)

Your review was positively awesome and makes me want to read this one. I don't think I would've given it a second thought until I read your post!

So, this one went right on my to-buy list. That's all I can say about how much I loved this review.

While this really doesn't sound like the kind of book I would normally enjoy, seeing how enthusiastic both you and Stephanie are about it I think I'll have to give it a try. I just hope it's not too gory.

Your review posted during my vacation - I'm sorry I didn't read until now. Fabulous review! I completely agree with your point that if it was just about grave robbing, Rotters would not have been as great as it is. Joey's plight is a universal one - trying to fit in and to belong - but conveyed in an unusual premise. I was so touched by his relationship with his dad, as unconventional as it was. And I also liked that the author also made Joey's relationship with his mom an essential part of the story. Too often in YA novels, the parents are MIA or portrayed as inconsequential when that is simply not true.

Great Blog Ryan and review.And "Rotters" sounds like a book both myself and daughter would definitely like...Just enough "Creepy details" But interesting premise..