Queen of the Air: A True Story of Love & Tragedy at the Circus by Dean Jensen (Giveaway Included) 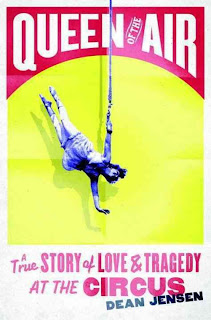 Like today's Beyonce and Madonna, the book's heroine was know to her vast public by just one name: Leitzel.  There may have been some regions on Earth where her name was not a household word, but if so, they were likely on polar ice caps or in the darkest, deepest jungles.  Leitzel and and Alfredo were the biggest stars of the most famous road show ever produced, the Ringling Bros. and Barnum & Bailey Circus.

Some of you may already know this about me, some of you may not, but the years between 5th and 9th grade, where spent traveling with a carnival.  Even before then, we led a pretty vagabond life.  We moved a lot, and when I mean a lot, I'm underrating the reality of it.  I understand what it means to really not have a physical understanding of the word "home."  Because of that, I've always been fascinated by those who were as, if not more, rootless than I am.  Those whose lives never seem to get the attention they deserve, almost as if that lack of physical connections somehow made them less important.  When those individuals are connected with the carnival or the circus, my interest knows no bounds.

Like most of the situations that fascinate me, I always seem to be a bit too easily to do any sort of research or reading about it though.  I can almost tell you diddly squat about the history of traveling shows in this country.  I can tell you even less about the men and women who knew no other life.  It's only when I'm handed an opportunity to do so, that I ever seem to take it.  Opportunity knocked when the good folks at Crown offered Queen of the Air: A True story of Love & Tragedy at the Circus, for review.  I was hooked by the synopsis in the email they sent me, and I knew it was a story I had to read. 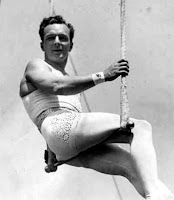 Lillian Leitzel and Alfredo Codona were the Queen and King of the circus world, the first and the last.  Both of them were born into circus families, and Lillian at least, not under the best conditions.  Her mother was only twelve years old when she was born, and the two never really saw each other on any sort of a continuous basis for years and years.  She grew up under her mother's shadow, only to eclipse it at a young age.  Her star became the brightest on planet, burning hotter and by the year.  She was one of the first performers in any venue to become know by her first name, and it was a name known all over the world.  What she could do in the air, on her rings, was second to none.  Stars of Hollywood and Broadway held her in esteem.  Presidents and corporate leaders flocked to her circle.  She was the Queen of the circus and became one of the most famous and revered women in the world.

Alfredo was in love from the moment he saw her.  He became a star in is own right.  He was the first performer to nail the triple somersault on a trapeze.  It was a feat that became a regular feature in his shows.  And while both of their lives would take twists and turns, including other marriages and flirtations, they were destined to be together.  They were the royal couple of the circus, and everyone knew it.

To say their relationship was smooth sailing, is like saying I had a normal childhood.  It was tumultuous, passionate, and about every other adjective you could think of.  Leitzel couldn't stop flirting with other men, and Alfredo couldn't tame his jealousy.  By the end of their relationship, they were in different countries trying to move on with their lives.

They weren't able to do it though, just as Leitzel had come to good terms with her mother and as she is moving on from Alfredo, the unthinkable happens.  Her tragic death shocked the world, and brought the circus world to its knees.  Alfredo's end is even more shocking and tragic, but it's one I'll let you discover for yourself.  They died the way they lived their lives, in a blaze of glory and burning brighter than anyone else around them.

How this story hasn't been made into a movie, is beyond me.  I hope some screen writer is feverishly working even know, their story deserves to be told, and they deserve to be remembered by the general public that once adored them.

The wonderful group at Crown Publishers have generously offered my readers the chance to win a hardcover copy of this book for themselves.  The giveaway will last until 11:59 pm, CST, on 8/15/13.  You must be a resident of the United States to enter, and all you have to do is leave me a comment with your email address.

I hadn't heard of this one, but I think I might enjoy it,

Hope you have a good week.

That sounds fascinating! I can see why Lillian didn't have a great relationship with her mother - what kind of parent would a 12 year old be?

No need to enter me.

I have only been to the circus twice. But frankly I have never heard of Lillian Leitzel, but this story sounds fascinating and I would love to read it. Thanks for having the giveaway.

This captivating story would be very enjoyable and treasured. Many thanks. saubleb(at)gmail(dot)com

Wonderful giveaway and post. This book is intriguing. elliotbencan(at)hotmail(dot)com

Now you have really made me want to read this! I know you have mentioned that you lived/traveled with a carnival growing up. My cousin and his family lived and worked with a carnival for years. We used to get free rides and stuff when they would come to local fairs in Michigan. It really seemed a hard life. It was hard for me to fathom when I looked at their kids.

Anyway, this book! I'm really going to have to read it. And I agree with you. They need to make it into a movie. Darn, I missed this giveaway too!