The Lottery By Shirley Jackson 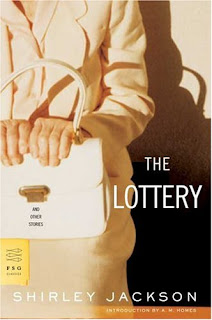 "The Lottery," one of the most terrifying stories written in the twentieth century, created a sensation when it was published in 1948.  Today it is considered a classic work of short fiction, a story remarkable for it combination of subtle suspense and pitch perfect descriptions of both the chilling and the mundane.  this collection, the only one to appear during Shirley Jackson's lifetime, unites "The Lottery" with twenty-four equally unusual stories.  Together they demonstrate Jackson's remarkable range - encompassing the hilarious and the horrible, the unsettling and the ominous - as well as her power as a storyteller.

I think everyone remembers the first time they read "The Lottery."  It's one of those stories that never seems to leave the corridors of your brain once the words have soaked in.  It's the type of story, that despite the "normalness" involved leaves you feeling unsettled from the first page.  As the growing feeling of dread starts to creep in, as a reader, you can't help but feel the ground shifting beneath you.  You know that there is something wrong, but no matter how hard you try, you can't seem to place your finger on it.  As each page is turned, that feeling of the world shifting does not go away.  Then the unimaginable happens.  Jackson lets you in on the horror of what the lottery really is.  As the last word is read, you just shake your head and sit there for a moment in shock.  But then you realize something.  It's really not the actions that horrify, it's the attitude of those involved, right down to the children.  It's the shock of what the lottery has done to the human soul that truly leaves you hoping against hope that people are better than this.  What really distresses me as that reader, is that I'm not convinced we are.

Until I had read this collection, I thought that was the extent of my experience with her short stories.  While I have read, and loved, The Haunting of Hill House many times, I didn't think I had read any of her other short stories.  But as I delved into a world that is uniquely Shirley Jackson's, I found myself experiencing deja vu.  At first I wasn't sure why, I'm pretty sure that I've never read the stories before, and except for one of them "Charles," I'm almost convinced I haven't.  Despite that, I could not shake the feeling of something being familiar and different at the same time.  As I got further into the collection, I put my finger on it.  It's not that I've read these stories before, but it's that I've read other authors try to copy Jackson's tone and style in their own writing.  It was like watching a decent remake of a movie, then seeing the original in all it's glory.  The imitators were good, but the real deal, is superb.

Jackson had a talent at taking the ordinary, and turning it into something that would leave a reader feeling as if something is wrong, but unable to vocalize it at first.  She got her characters to behave in ways that at first seemed normal, but would then take on a tone that just didn't mesh with the visuals.  It's a glorious talent to have, and not something most writers possess.  In each of her tales, whether they delve into gender roles, class distinctions, racial stereotypes, or a few hours of someones life, Shirley Jackson creates a fully fleshed out story that leaves the reader with their mouth open and their brain cells trying to process what they just read.

It's the unknowingly racist mother in "After You, My Dear Alphonse," that will have you shaking your head in disbelief.  It's the young wife and mother who can't seem to shake her own fear of respectability and race in "Flower Garden," that will leave you with a big hole in your heart at the missed opportunities to do what's right.  It's the flabbergasted parents who maybe don't know their own child in "Charles," that will make you smile and nod at their blindness.  It's the vitriol, suspicion, and fear instilled in young girls that will leave you with a sense of wanting to slap someone in "Dorothy and My Grandmother and The Sailors."  It's the chance encounter with the deranged in "The Witch," that will make a traveling parent nervous.  But most of all it's the uneasiness and sense of oddness that will stay with you long after you close the last page.

Excellent review! I had the oddest sense of deja vu when I read this collection and wasn't sure why until just now! You're right, other authors have tried to copy her and that's why her stories seemed so familiar. Well done!

I've only read The Lottery and We Have Always Lived in the Castle, and both this year, but I agree about that feeling of deja vu.

I think the latest to ride the Shirley Jackson coattail is Suzanne Collins. The Hunger Games was very remininscent of The Lottery, for me.

> She got her characters to behave in ways that at first seemed normal, but would then take on a tone that just didn't mesh with the visuals. It's a glorious talent to have, and not something most writers possess.

This is her genius. It's the normalcy that chills us, when you see what normal really means.

I'm kind of embarrassed to admit that I've never read Jackson's work. I have heard that The Hunger Games seems to be a take off The Lottery. This is another author I need to try.

Loved your take on this one. Love reading Jackson in the fall for the RIP Challenge.

You put your finger on it, Ryan - So many authors, even well-established ones have Jackson-esque elements in their work that reading the original stories does seem familiar in a way.

You've got me wanting to read the other short stories in this book. I'm with you in regards to human behavior. I watched The Stoning of Soraya and that happened in the 80s (I think) . Sure it could and does happen today, which is a scary thought!

Great review Ryan. I forgot I read this story, to be honest I couldn't even tell you what it's about - I must revisit.