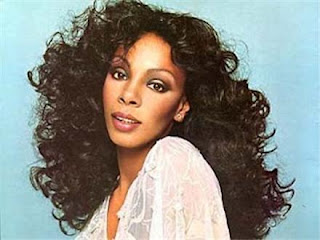 Now I'm too young to have been a fan of Donna Summer's as a kid since she was at the height of her career when I was just wee lad.  It wasn't until I got to be a bit older, college, that I really got into disco music.  And you can't be a fan of disco, without being a fan of Donna Summer.  Now I wasn't one of those that got upset with her over the supposed comments she made about gay people and AIDS.  It happened during the 80s and her haters tried to bring it back up in the 90s, but I really didn't care.  She denied ever saying it, and I have to give her the benefit of the doubt.  Despite the controversy, all I cared about was the music.  It's what she will be remembered for.  It was sad to learn she sucummbed to cancer early this morning.  I hope she is in a better place and is at peace.

No one could sing disco like Donna Summer. I was dating when she was at her peak. It seemed every evening closed with Last Dance.

Donna Summer, Laura Branigan and Whitney Houston were the reigning pop divas of the 70s and 80s and, together, they had a lot of memorable hits between them. I will remember Summer for Love to Love You Baby (who doesn't?), The Wanderer, She Works Hard for the Money, Last Dance, and Bad Girls.

Wow, just saw this in the morning. A great loss.

I was saddened to hear of this. She was definitely an icon. RIP, dear lady.

Donna Summer was one of a kind. She works hard for the money was one of my faves. RIP, Donna.

Donna Summer was a Huge Part of my Life when going out with friends dancing and having a Great Time.Thank You Donna...We have Lost so Much Talent in the Past few years....