The Franchise Affair by Josephine Tey 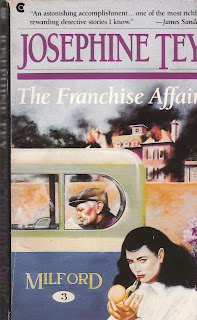 Robert Blair was about to knock off from a slow day at his law firm when the phone rang.  It was Marion Sharpe on the line, a local woman of quiet disposition who lived with her mother at their decrepit country house, The Franchise.  It appeared she was in some serious trouble:  Miss Sharpe and her mother were accused of brutally kidnapping a demure young woman named Betty Kane.  But Miss Kane's claims seemed high unlikely, even to Inspector Alan Grant of Scotland Yard, until she described her prison - the attic room with its cracked window, the kitchen, and the old trunks - which sounded remarkable like The Franchise.  Yet Marion Sharpe claimed the Kane girl had never been there, let alone been held captive for an entire month!  Not believing Betty Kane's story, Solicitor Blair takes up the case and, in a dazzling feat of amateur detective work, solves the unbelievable mystery that stumped even Inspector Grant.

After I read Two For Sorrow by Nicola Upson, which features Josephine Tey as the main character, I've been wanting to read Tey's actual work.  I fell in love with the fictional character of Tey, so I wanted to see what her mysteries were really like.  So every time I went to the used bookstore I would be on the lookout for some of her books, but never had much luck at it.  Then I struck pay dirt, one day I went in and they had about ten of her books all ready for me to grab and run out the door.  Now I'm really picky about used paperbacks, so if they are in horrific shape I won't get them.  That left me with two books, one of which is The Franchise Affair.

I really wasn't sure what to expect when I opened up to the first page and started to read about Robert, Marion, and the kidnapped girl.  I was pretty sure I liked the sound of the book, but we all know that those can be rather deceiving.    I will admit that it took me a few pages to get into the rhythm of Tey's writing, but I quickly found myself falling in love with yet another Golden Age mystery writer.

I can't quite put my finger on it, but there is something about the British Golden Age writers that I love so much.  With the exception of Mary Roberts Rinehart, who was writing around the same time, all my favorite mystery authors tend to fall into that category.  Their writing is both complicated and simple at the same time.  The story lines themselves double and triple back on eachother leavening me, as a reader, slightly confused but in awe at the same time.  They, and I include Tey in this, were able to craft richly drawn out mysteries,that kept a reader guessing at every turn, but never got to far ahead of themselves.  They were story lines that kept me intrigued, were never unfair, and anything but dull.

In The Franchise Affair, Tey is able to craft a logical story of a young woman, Betty Kane, who reminds me of Rhoda Penmark.  Nobody really believes her story, but it's so credible that they are forced to go along with it anyway.  Robert is bound and determined to save the reputation of Marion and her mother, of course this being a Golden Age mystery, there is a little romantic impulse behind his actions.  By using his brains, and just a little luck, he is able to figure out the truth of what really happened to Betty Kane during the month she was missing.

I've already finished another of her books, Brat Farrar, so expect that review shortly.  I'm just glad that after I've finished all the Agatha Christie and Mary Roberts Rinehart books, that I have another author to jump into to.

I've read the Nicola Upson book so this one is interesting for me as well.

It is definitely called the Golden Age for a reason--I love many of the writers from this time period also. I haven't read this Tey yet, but it sounds wonderful.

> Their writing is both complicated and simple at the same time.

I think you nailed it!

I'm glad the book lived up to your expectations! That cover really dates it, doesn't it?

I just bought a Josephine Tey book (the one about Richard III). I've heard good things about her!

Do you think this is more of a psychological thriller?

I didn't realize that the era was called Golden Age. Very cool and the cover is so awesome! I'm thrilled that you enjoyed it so much!