From Hell With Love by Simon R. Green 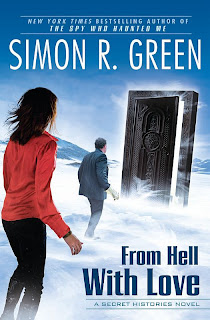 It's no walk in the bloody park, being a Drood - one of the family who has protected ordinary humanity from the things that go bump in the night for centuries.  We're no much liked - even by on another.  Now our Matriarch is dead.  Murdered.  Maybe by one of us.  Maybe not.  It's been left up to me, Eddie Drood, to figure out whodunit.

I'm not a huge urban fantasy fan by any stretch of the imagination.  I think I name on one had the number of series that I actually enjoy in the genre. Thankfully, for me, one of those is The Secret Histories series by Simon R. Green.  It has to be one of the funnest and exhilarating series I've ever had the privilege to come across.

In the fourth book, From Hell With Love, Eddie is given a monumental task.  Find out how the Matriarch was killed in her bedroom and what caused so many of the family to turn into bloodthirsty "zombies" intent on killing Molly, The Wild Witch of the Wood, and Eddie's girlfriend.  Eddie is quickly thrown for a loop and is forced to deal with the idea of having a traitor within the family.  Of course since half of them thinks he did it, that won't be an easy investigation to undertake.

Are one of the various nefarious criminal organizations behind the bloodshed?  Could it be the fairies or elves bent on revenge?  It's it the petty scientist bent on world domination?  Or is it something even worse, a cancer spreading through the ancient family itself.  Is there someone in the manor who is bent on destroying the family? Of course it could be the mythological AntiDroods.  Is that family who's only major goal is to kill every Drood on the planet real, or do the belong in myth?

The mystery takes Eddie around the world, from Hollywood to the snowy ends of the Earth, he is forced to hunt down the person(s) responsible the death of his grandmother, the Matriarch.  It's a sarcastic, tongue in cheek romp that mixes all the best of James Bond and urban fantasy.

Haven't read this one yet, but I love the Drood series! Love the James Bond riffs, and the author has a snarky sense of humor that I love! Need to read this one!

I haven't read any books by Simon. R Green yet but I really want to. This series sounds like its right up my alley :)

Got a kick from the title, what's next "You Only Live Once...On Earth" - LOL.

I've never heard of this series before...sounds different to be sure!