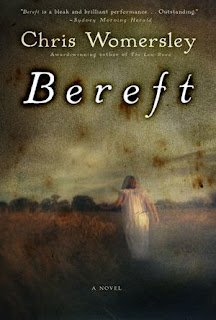 The year is 1919 and the Great War has ended.  Sergeant Quinn Walker - damaged body and soul by his wartime experiences - decides to return home to the small and desolate town of Flint, Australia, to set right the past.  Ten years earlier, he had fled following the horrific rape and murder of his beloved younger sister Sarah - a crime that everyone, including his family, believes Quinn committed.

When he arrives on the outskirts of Flint, Quinn learns the town is gripped by the deadly flu epidemic sweeping the globe.  And though he is in danger of being hanged if his identity is discovered, Quinn feels compelled to convince his mother - dying of the flu - of his innocence.  As he hides out, working up the courage to confront the tragedy that shattered his life, Quinn meets a mysterious orphan girl, Sadie Fox, whose powers verge on the magical and who seems to know more about the evil that lives in Flint than any child should.

I'm one of those readers that tends to get over involved with the characters in a book.  It's one of those characteristics that cuts both ways.  I can get so lost in the lives of the characters that at times I forget I'm reading a fictional book.  Other times I feel like a 10 year old reading a treatise on the incubation times of typhus in 28 different species of rodents.  In case you didn't get the sarcasm in the last sentence, that's not a good thing.  That means the characters are so unengaging and generic that it destroys any hope of my enjoyment of the reading material.  It also needs to be said that most books fall somewhere in the middle of that spectrum.  Bereft is one that finds itself on the very fringes of my thinking.

Quinn is one of those characters that draws you in as soon as they appear on the page.  He is such a damaged young man that has seen the worst of the human condition and is still walking.  He saw the man who raped and killed his younger sister, as he cowered in fear.  He ran from home that very day, out of fear and heartbreak.  He saw his fellow soldiers blown to bits and had to do his fare share of battlefield killing as well.  He has made repeated trips to hell, and despite the damage, it ready to face a past that most of us who cower from.

It's who Quinn is as a human being and as a brother that dictates everything he does or will do.  He feels that he failed his sister, failed everyone who has asked him for help since then, and isn't sure what to do now.  Once the war is over, he comes home, not really knowing what to do.  He wants to tell the truth, but quickly realizes nobody is going to believe him.  When he meets Sadie, he is able to rectify some of the mistakes of the past.  He may not have been able to save his sister, but he may be able to help this strange girl escape a similar fate.  Quinn is seeking forgiveness not only from others, especially hi mother, but from himself as well.  He has a drive to correct the uncorrectable, so he needs to do the next best thing in order to move on with his life.

Bereft is one of those books that is character driven for all the right reasons.  The author, in Quinn, produced a character that is human above everything else.  He could be anyone given the same circumstances.  He is that part of us that needs to be able to fix the past, something that's easier to do in fiction.  He does what we all want to do at some part in our lives.  He will be a character that lives amongst many others that have taken up permanent residency in my imagination.
Posted by Ryan at 12:00 AM

I also love character driven books, but the are tricky to write. Actually, I guess every book in every genre could be tricky.

I have been meaning to read this book ever since it was released here in Australia. Good intentions and all that go out the window in the face of too many books though! Off to rerequest it from the library again.

It really sounds like you connected with this book and character. I'll have to watch for a deal on this one. =O)

Great Review Ryan..I am sad that I couldn't be in The Book Club For Bereft..I had to pass on this one and Debbie certainly understood..But will get to read it...