The Sword of the Lady by S.M. Stirling 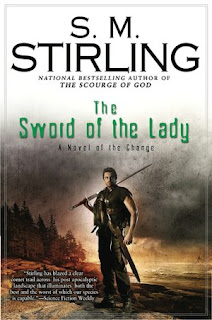 Rudi Mackenzie has journeyed long and far across the land that was once the United States of America, seeking the shore where the sun rises, hoping to find the source of the world-altering event that has come to be known as the Change.

Finally, his goal is at hand.  He has arrived at Nantucket, an island overrun with forest, inhabited by a mere two hundred people who claim to have been transported there from out of time.

Only one odd stone house remains standing.  Within it, Rudi finds a beautifully made long sword seemingly waiting for him.

And once he takes it up, nothing for Rudi - or for the world that he knows - will ever be the same....

This won't be a long review, so those of you who are tired of this series can relax.  It's not that there isn't a lot going on here, obviously there is,  I just have to admit I'm really, really bad about reviewing epic fantasy books.  Actually, scrap that.  It's not the reviewing part I suck at, it's the summing up part that kills me every time.

I'm always a loss to know what to include and what doesn't seem very important.  Of course that is a silly predicament to be in, anyone who is a fan of the genre knows that everything is important.  Even the slightest detail can have massive ramifications down the road.  The wrong decision, no matter how minor, can change the entire course of the story.  I think that's part of the reason that despite the publisher's synopsis being incredibly weak, I'm not going to try and improve on it.  I've met and accepted my weakness, now it's time to move on.

What I do want to quickly mention is how much I adore the author's ability to build a believable world out of the ruins of ours.  Postapocalyptic books, when done correctly, take you on an incredible journey of individuals and society as a whole trying to rebuild their lives.  In a world where all electricity or anything more advanced than a watermill no longer works, it's changes the rules beyond belief.  When you can no longer drive or fly, a cross country trip takes on an epic feel.  Those who survived the chaos had to rebuild their own parts of the country as best they could.  Some better than others, though most of them in a way that would seem harsh to us, but necessary to them.  These different settlements quickly take on the customs, religions, and beliefs of those who lead them through the worst of times.  Some areas turn into a feudal society with knights and castles, others turn militaristic in the hopes of trying to rebuild the United States out of what's left of Idaho.  Others revert to "modern day" vikings, worshiping the Norse gods and taking on those beliefs as their own.  It's a new, complex world that 24 years after the Change is slowly coming into it's own.

I thought for anyone interested I would show you a map of how things have shaken out, territory wise so far: 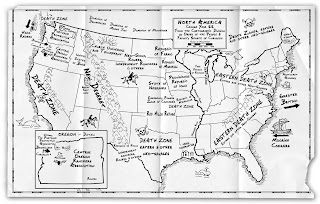 The other aspect I love about epic fantasy, including this series, are the characters.  In brilliantly written fantasy, it's the characters that drive the story, not the storyline.  This series has been filled with some of the best examples of that.  Because of the length of time it's taken Rudi and his friends to travel across the entire land of what used to be the United States, they have encountered a myriad of people who the author not only fleshed out in great detail, but drew them in such a way that you end up caring for them almost as much as the original cast.  Rudi gains allies and friends along the way, as they lose others.  A journey like this will result in friends not making it all the way.  As a reader, it's always sad to have a character you enjoy die, but it makes the time spent with that character all the more enjoyable.  Don't ask, this is almost bordering on the metaphysical, so I think I should shut up now.

Either way, I hope others, especially fans of the genre, discover for themselves the pure joy this series is.

Post-apocalyptic scenarios are just so provocative. What will chaos and the end of civilization bring out in people? I must admit modern-day Vikings isn't one of the possibilities I would have imagined but in such a situation, I'm sure anything goes.

Ok this sound freaky and interesting, I do want to check out this series now

I think at some point I would like to jump back into this genre again. Sounds like a good place to start!