Death In The Clouds by Agatha Christie 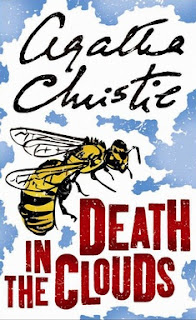 From seat No. 9, Hercule Poirot was ideally places to observe his fellow air passengers.  Over to his right sat a pretty young woman, clearly infatuated with the man opposite; ahead, in seat No. 13, sat a countess with a poorly concealed cocaine habit; across the gangway in seat No. 8, a detective writer was being troubled by an aggressive wasp.  What Poirot did not realize was that behind him, in seat No. 2, sat the slumped, lifeless body of a woman.

For what ever reason (Mary Roberts Rinehart) I've been neglecting my Agatha Christie self challenge and I figured I better get that corrected as soon as possible.  If I hadn't decided to read them in order, I think it would have been a bit easier.  Like my mom told me, nothing that's worth it is easy.  So getting back into the amazing imagination that Agatha Christie possessed was a treat.

Now I know you guys know that I'm not a hug fan of Hercule Poirot, I like him, but can only take so much of him.  I always imagine singing "Just a Spoonful of Sugar" when I'm reading his books.  He has a brilliant mind, and a brilliant ego to match it.  I don't know if it's that distance really does make the heart grow fonder, or if I'm actually starting to enjoy time spent with Poirot.  Either way, he didn't grate on my nerves as he normally does, and I found him just a bit endearing in this one.  I think what helped is that he seems to be just as flabbergasted by this murder as the rest of us.

Who knew you that you could create a believable (if just barely) murder that happens in a plane thousands of feet up in the air.  Throw in wasps, blowpipes, enough suspects to fill a dinner party, and you got the makings of one of the funnest mysteries I've read in a long time.  Even the characters know how far fetched the murder is.  It's one of those situations that would never happen in real life, but once it comes out of the pen of Agatha Christie, it somehow makes sense by the end.

My only quibble with it, and it's a small one, is the way the murder is investigated.  The murderer is involved, along the same lines they were in the last book, Three Act Tragedy.  I'm not even sure I would have noticed the similarity if they weren't back to back books.  It didn't get in the way of my enjoyment, I just thought it was odd using the same plot device twice in a row.

I've only read one Christie book and it featured Poirot. I liked it but didn't love it. Now I'm wondering if I need to try one of her books featuring a different character.

I'm glad that Poirot is growing on you! I have loved my foray this year into Christie's books!!

I love this book, Ryan! Thanks for reminding me that I haven't reread it in ages. Must get my hands on a copy. All my Agatha Christie books quite literally fell apart a while back.

The murder is preposterous, but since when has that ever stopped Dame Agatha?

I read a lot of Agatha Christie in high school, and I think it's about time I revisit her work!

I don't think i've ever read this one. Poirot has always been one of my favorites though, since I was a teenager.

I love reading Agatha Christie mysteries and I think Ive read over half of them but I still can't stand Poirot. I think it's the ego. It still doesn't stop from enjoying them. They are definitely the best of the genre!