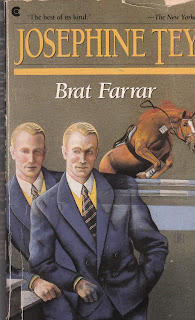 Simon Ashby was soon to turn twenty-one and the lean years would be over.  After his parent's death, his Aunt Bee had come to Latchetts, the Ashby's small country estate in the English midlands, to care for him, his three sisters, and his twin brother, Patrick, who had later disappeared; it was assumed that Patrick had drowned himself, although his body had never been found.  Now Simon was about to inherit Latchetts and his mother's sizable fortune.  Enter Brat Farrar, who had been carefully coached on every significant detail of Patrick's early life, who imitated is every mannerism and even looked like him.  it seemed an impossible feat:  to pose as someone else before his very family, especially when Simon discovered what was happening and that Brat was out to cheat him of his fortune!  The question of why he wasn't exposed begged to be answered.  Had Simon laid careful plans to foil Brat's game?  Culminating in a final, terrible moment when the two confront one another.

I've been trying to figure out a way to review or explain my reactions to  this without spoiling the whole book for anyone who actually takes the time to read the entire post.  After days of thought and prayer, I'm forced to face the stone cold truth, I can't.  There is no way to explain my reactions to this book without giving away the entire point of the book.  So, that leaves me with three choice.  Don't write a review at all, which isn't going to happen.  I could spill the beans and leave you with no reason to read the book for yourself, which doesn't sound like a lot of fun either.  My third option is simply write a short paragraph saying how much I love the book and leave it at that.  I think it's the third route I'm going to take.

This was one of those books that tries to trick you from the very beginning.  It's gives a wonderful, interest inducing synopsis that makes a reader want to take the book home, curl up on a couch, and read all about the schemes of Brat Farrar.  The title of the book alone should have given me pause to think that not everything was as it appeared to be.  But it wasn't anything I really thought about until I was so suckered into the lives of the Ashbys, that nothing was going to tear me away from this book.  I found it to be compelling, well thought out, and structured in such a way that nothing seems out of character or out of place in the book.

I told you I loved the book, gave a hint at the twists and turns involved in the storyline, and now I'm just going to say that fans of the Golden Age of mystery, should give this one a go.

Definitely one for me but where its going to come from is another mystery!

I read the synopsis and it sounds like an exciting plot. I'm glad you enjoyed it so much.

I have to say that your review has intrigued me, especially since I just finished reading The Man in the Rockefeller Suit, which reminds me a lot of this Brat Farrer character. I'm going to go check now if my library has this book in stock.

Okay, your review definitely caught my attention. And I do love a story with some good twists and turns.

I loved this book. In fact, it's on my list of 101 Favorite Mysteries.

This book of Tey's is like sinking into the past in thrall of a great story and some terrific characters, slowly becoming aware that you are in the presence of great evil.

I also loved the PBS series based on the book done many MANY years ago. If you can find it, Ryan, I KNOW you will love it too.

It IS a dilemma to write about this book. I like the route you took.

I'm glad you went with option #3. I loved reading about how much you enjoyed this one and it makes me rethink those older books and actually giving them a try one of these days!

Well, I really enjoyed reading your 'non-review review', especially as I just finished reading it myself. It's not my favourite Tey but it is very well worked out in terms of theme and plot and has some very strong characterisation. I think just maybe I didn't love the Brat character quite as much as Tey did and was less inclined to give him quite the wide benefit of the doubt that she does, but that's not-picking really.

I've only read one Josephine Tey before, The Daughter of Time. I enjoyed it because it exonerates Richard III, but I didn't LOVE it because so much of it was just a lot of rapid-fire conversation about people I didn't know that well. Maybe one of her more traditional mysteries would sit well with me- this sounds great!