A Better Man by Jaime Reese 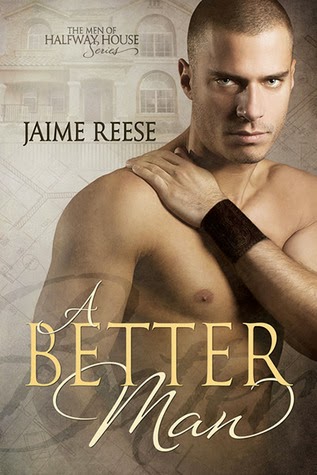 Matthew Doner is starting over.  After a five-year prison term that alters every aspect of his life, he receives a bequest from his aunt with the stipulation that he use the money to make things right.  Breaking free of the long-standing role he's played and inspired by the few who support him, he decides to create a safe place where people like him can find purpose and start a new life.

Julian Capeletti likes challenges.  He is confidant, brash, stubborn, and just what Matt needs.  Desperate for work after a downturn of luck, he accepts the job to renovate Matt's crumbling building.

Over the course of a year, romance simmers between them as they restore the house.  But there's a bigger renovation that must take place in their hearts.  To become better men, they need to learn to trust each other even when secrets and painful memories they fear may rip them apart.

I'm not gonna lie to you, the main reason I bought this book was the gorgeous man on the cover.  Look into his eyes, and tell me he isn't smoking hot. Scorching. Smoldering. Breathtaking. Stunning. I think I could go on for another fifty or so one word sentences, but I think you get, and agree with my point.  And for those of you who need to pair the cover with a character, that is Julian.

Luckily, once I hit the purchase button, and A Better Man downloaded to my Nook, the story was just as adorable as the cover.  As individuals, Matthew and Julian are dynamic characters.  They come from opposite sides of the track, but they are both damaged by their families, and by circumstances out of their control.  They have both paid fairly heavy prices for the mistakes of others, and neither one of them is quite willing to open themselves up to more pain.

It's that mistrust and fear, that keeps the relationship on a slow simmer for months on end.  Neither one is quite willing to take the next step. Both of them are scared of the consequences, positive and negative, of allowing their attraction to become more than simple lust.  Before they know it, they have already gone beyond lust, into love, and they barely kissed.  It's the slowness to the relationship, the hesitancy behind the movement, that allows them to build a solid base to support them through the setbacks to come.

Once they both decide to take the next step, to allow their feelings out in the open, nothing is going to pry them apart.  They are tested almost from the beginning, but that core strength is there, firmly rooting them to each other.  It's that foundation that allows them to know that this relationship is the One.  They know that there is no expiration date on their time together, that it's a true happily ever after.
Posted by Ryan at 11:17 PM

He is a hunk, isn't he? For some reason, I found it really amusing that you bought this book for its cover! I know I've done it before, but thought I was the only one. :)