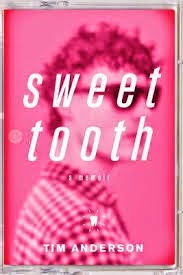 What's a sweets-loving young boy growing up gay in North Carolina in the eighties supposed to think when he's diagnosed with type 1 diabetes?  That God is punishing him, naturally.

Sweet Tooth is Tim Anderson's uproarious memoir of life after his hormones and blood sugar both went berserk at the age of fifteen.  With Morrissey and The Smiths as the soundtrack, Anderson self-deprecatingly recalls love affairs with vests and donuts, first rushes, coming out, and inaugural trips to gay bars.  What emerges is the story of a young man trying to build a future that won't involve crippling loneliness or losing a foot to his disease - and maybe even one that, no matter how predictable, can still be pretty sweet.

One of the things I love about memoirs, whether they are from someone you have heard about before or not, is how they can get you thinking about your own life.  It's amazing how reading the narration of another life, can make you rethink yours, how it can bring memories to the front of your mind that you haven't thought of in years. I'm always surprised and overjoyed when something will trigger one of my memories, especially when they revolve around sex.

As far as the crush goes, I had a huge crush on my pastor's son.  Terry Kent was older, I think he was either a Senior in high school, or a Freshman in college when I first laid eyes on him, and he invaded my dreams for a very long time after that.  One of those dreams involved the baptismal, but you guys don't want those details.  Sadly nothing ever happened, except for a short shoulder rub at church camp, but that touch was enough for me, it was the fuel for fantasies for months afterwards.  When I remembered Terry Kent, I looked him up on Facebook for the first time, and I must say, he didn't age very well.

Sweet Tooth is one of those memoirs that I think anyone who has ever had an awkward adolescence, and who hasn't, should read.  It reaffirms the idea that while all of us are unique and have different lives from one another, we all share a core set of experiences that allows us to relate in ways that we tend to overlook in our day to day lives.  It's the kind of story that helps to remind us that we all share a common humanity, and I want to thank Tim Anderson for sharing his story, and reminding me of that.

I would also like to thank Lisa of TLC Book Tours for the opportunity to read and review this book.  Please visit the tour page to read other reviews.
Posted by Ryan at 7:19 PM

Ooooohhhh! I love memoirs such as this one! Somehow, these books remind me of how difficult it was for gay people to come out and be secure with their sexuality several years ago. These books remind us that I, as a gay man today, am blessed with so many things, although we still have a long way to go.

I'd also like to recommend to you the autobiography of Frank Bruni, the former food critic of the New York Times. The title is Born Round. It touches on a lot of things -- his love for food, his dealings with his weight, his coming out. It's terribly funny in most parts and very touching too.

I'm a memoir junkie and will have to look for this book!

What a wonderfully personal review Ryan! Thanks for being on the tour. I'm featuring your review on TLC's Facebook page today.

I came of age in N.C. in the 80's, so this immediately grabbed my attention. Jesse Helms ... I remember him vividly. What a scary man. :-/

I also enjoy memoirs by people who don't fit in, whether it be growing up gay in a conservative area or for other reasons. This sounds right up my alley.

I loved this post, BTW. Thank you for sharing personal details.