The Tin Box by Kim Fielding 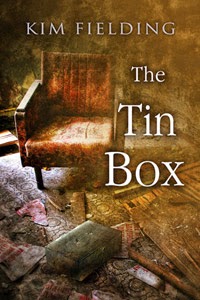 William Lyon's past forced him to become someone he isn't.  Conflicted and unable to maintain the charade, he separates from his wife and takes a job as caretaker at a former mental hospital.  Jelley's Valley State Insane Asylum was the largest mental hospital in California for well over a century, but it now stands empty.  William thinks the decrepit institution is the perfect place to finish his dissertation and wait for his divorce to become final.  In town, William meets Colby Anderson, who minds the local store and post office.  Unlike William, Colby is cute, upbeat, and flamboyantly out.  Although initially put off by Colby's mannerisms, William comes to value their new friendship, and even accepts Colby's offer to ease him into the world of gay sex.

William's self-image begin to change when he discovers a tin box, hidden in an asylum wall since the 1940s.  It contains letters secretly written by Bill, a patient who was sent to the asylum for being homosexual.  The letters hit close to home, and William comes to care about Bill and his fate.  With Colby's help, he hopes the words written seventy years ago will give him courage to be his true self.

You wouldn't think that a gay romance novel would actually have a social conscience.  Or if it did, you would think it would be a lighter lesson, not a history of the way gay men and women were treated by a medical profession that viewed them as diseased.  And not in the way that would make those same professionals look upon a patient with kindness and compassion, it's the kind of disease that makes the patient immoral, crazy, and dangerous.  As hard of a time it is to grow up gay now, I can't even fathom growing up in a culture that allows the forced imprisonment of gay men and lesbians, that allows every sort of medical experimentation to be preformed upon them, that allows full frontal lobotomies in order to "cure" the perversion that is rotting the brain.  I can't imagine the fear that would instill in someone, constantly looking over their shoulder, having to hide who they are in order to stay alive.  The self hatred that would impose on most people would be heartbreaking by itself, but the fear of falling in love, of allowing yourself to be happy, knowing it could go horribly wrong on so many levels, to keep that as far from yourself as you can, would be a soul shattering way to live.

As a gay man in the here and now, I know that is the life that many gay men and women have to lead in many countries.  Middle Eastern and African countries are rife with stories of men, some in their teens, being killed for kissing someone they are attracted to.  All you have to look is towards Uganda who just made being gay punishable by death, or the way Russia is starting to treat it's gay citizens as lepers and criminals.  I know that those horrors exist in the world, and that while I can still get bashed in this country, I'm not scared of living my life to the fullest.  But that wasn't always the case, it wasn't even 60-70 years ago that these same attitudes existed in this country.  I always joke that I would have loved to be born in the 20s because of the music and movies that came out in the 30s and 40s.  I would have loved to have been around when it was first coming out.  To see the new Thin Man movie the weekend it came out, to go to a dinner club and dance to the beat of my favorite music, would have been heaven to me.  But then reality sets in and I start imagines the rest of my life as a gay man, and I am forced to realize that I was born at the right time.

I don't want to you think that this book is heavy and depressing, because it's not.  I won't lie, reading Bill's letters had me tearing up at times, but the romance between William and Colby made up for that.  You can see a lot of Bill in William, but thankfully, William is living in the right times, even if he is going through some of the same issues of self doubt.  William had already taken the first step by leaving his wife, though he decides to hide out soon after that.  Coming into contact with Colby sort of forces the issue, and the two of them strike up a friendship that grows into something more.  He ends up having the relationship that Bill wanted to desperately in the past, a relationship between two loving adults who don't have to hide how they feel.

Holy potatoes. :-( I knew, of course, that homosexuality used to be considered a mental illness. It was in the DSM until the mid-70's. Even in the early 90s, when I was getting my master's in counseling, a professor referred to homosexuality as a "severe character disorder." (Holy crap ... you should have seen my jaw drop.) But forced lobotomies? I had no idea.

I suspect this novel will sadden and infuriate me, but it sounds excellent. I'll add it to my list.