The Regatta Mystery by Agatha Christie 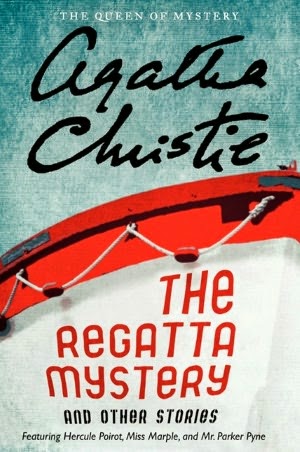 There's a body in a trunk; a dead girl's reflection is caught in a mirror; and one corpse is back from the grave, while another is envisioned in the recurring nightmare of a terrified eccentric.  What's behind such ghastly misdeeds?  Try money, revenge, passion, and pleasure.  With multiple motives, multiple victims, and multiple suspects, it's going to take a multitude of talent to solve these clever crimes.

In this inviting collection, Agatha Christie enlists the services of her finest - Hercule Poirot, Miss Marple, and Parker Pyne - and puts them each to the test in the most challenging cases of their careers.

You already know that I adore Agatha Christie and that I adore short stories, and for the most part, the combination is always a winner for me.  The fact that this collection features Jane Marple and Parker Pyne should have made my enjoyment a slam dunk, a touchdown, and a home run all rolled into one.  Sadly their involvement wasn't enough to save the overall collection for me, Jane only had one story.

I'm not saying I hated it, or even disliked it, because I didn't.  If these stories were written by any other author, I would probably be gushing right about now. Dame Agatha at her worst, is still better than most authors at their peak.  To put it simply, most of the stories were too easy to figure out.  With the Hercule Poirot stories, which there were too many of, I pretty much knew who the killer was going to be from the get go.  The clues weren't subtle enough, the conclusion almost too easy to figure out, and the killer was the obvious choice.  They seemed to lack her usual twists and turns, which she is so good at.  Granted, those twists can be harder to do in such a short piece of writing, but I don't seem to have had the same issue with her earlier short story collections.

Of all the stories, there was one that seemed to be quite a bit different from the vast majority of her writings.  "In a Glass Darkly", does not feature any of her regular characters, nor is anyone murdered.  There is no crime to solve, relationship to untangle, or problem to solve, at least not in the traditional mystery sort of way.  Instead it reads like something that should have appeared on CBS Mystery Radio, slightly dark and suspenseful, with just a touch of the paranormal.  It's so simple in its idea and execution, but it's the story that has the most impact.  After all that, it even ends with a happy ending.  It's the gem of the book, and the one story that will stick me with for a time to come.
Posted by Ryan at 5:02 PM

Sorry it disappointed you even a bit. It happened to me with Diana Gabaldon and I was very upset!

I love Agatha Christie, and particularly her stories featuring Poirot, but haven't actually tried any of her shorts. I suppose she found her winning formula in the longer meandering mysteries that became so popular.

I've only read one of her books and it was just okay for me. I really do need to give her another chance.

By the way, I saw your comment at Sheila's the other day and you really do need to write children's books.

I adore Agatha Christie and am trying to reread all her books. It's been a long time since I've read this particular one. I do love her short story collections but I don't think Poirot stories tend to work the best unless it's a collection like The Labors of Hercule. I do love a good Parker Pyne though! Lovely to find another Agatha fan and I see you've got a Patricia Wentworth on your reading list! So glad I found you through Bloglovin.

I've never been a big Agatha Christie fan, but sorry that this one didn't live up to your expectations as I know you love her. Hope your next read knocks your socks off! :)

I did see they will show some Miss Marple this summer, not this one though ;)

Christie was my 1st Introduction to Adult Mysteries..Because of my Mom.,,Of course I Never reread any... I want to..