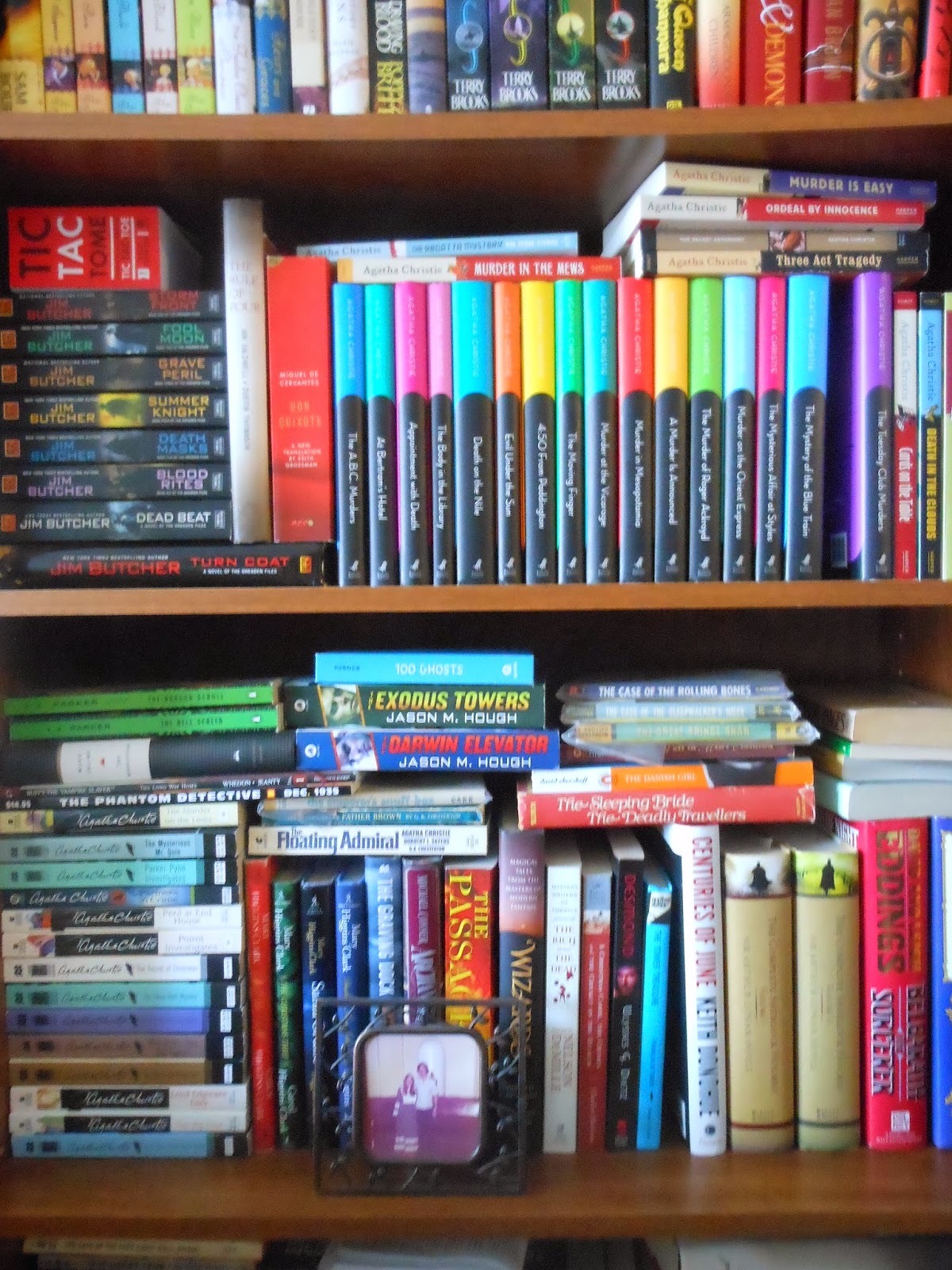 For some odd reason, as I woke up this morning, I was thinking about why I read so much.  Other people have hobbies that they don't seem to obsess over, or take up all their free time doing, so why does it seem that I'm reading so much right now.  Hell, you don't see every stamp collector starting a blog to glorify his hobby, so why was it so important for me to do it?  Reading is the one constant of my day to day life, other than the consumption of food. If I'm not at work, or doing some other activity that precludes the act of reading, I'm reading.

And it's nothing new.  When I was a kid, there were times, even in summer, when I would rather read than play outside.  One summer, I was convinced that I would rather read my great-grandmother's collection of Encyclopedia Britannica than be outside.  They had to force me to go play.  A lot of that had to do with my childhood.  We moved a lot, and when I mean a lot, I had lived in more places by the time I was in 5th grade, than most people live in their entire lifetimes.  And that's not even talking about all the places and schools I went to when we were traveling with a carnival for three years, or the time we spent living with a biker gang in Washington state.

Because of all that, it was hard for me to relate to people my own age.  We never stayed around long enough for me to make real friends, and when I did, it wasn't that long before I would have to say goodbye.  When we were with the carnival, that happened every two weeks for the majority of the year.  Books were constant though.  Whether or not they stayed the same over the years, I always had stories and characters I could escape into, that would be there for me when nobody else could.  In essence, books became a companion and my best friend.

As an adult, while they don't serve the same function anymore, books are still a vital part of my life.  I don't need them to be my friends now, I have enough of those, but I do use them as my greatest resource for stress relief.  When I was in my twenties, I still read a lot, but I used going out, and dancing became my main way to get rid of stress.  Lot's of sex helped in that area too, but that's what gay guys in their twenties do.  For that matter, that's what too many men still do, way into their thirties and forties.  I out grew all of that though, and I found myself gravitating back towards books.  It's the time spent in a new world, surrounded by new and familiar characters, that seems to keep the outside world from getting to big to handle.  The pages of a book are where I go to be myself again, the self I want to be, without all the stress and cares weighing me down.

It's the way I'm able to get into the story, to take it all in, that allows reading to be the perfect stress relief.  I have to believe in what I'm reading, if it doesn't come across as true, I lose interest.  When I'm reading about Randy Dreyfus, he feels as real to me as Neil White.  It's the whole reason why I have so much fun with my Favorite Fictional Character feature, it's because they are real to me when I'm spending time with them.  Dagny Taggart is no different from George Washington or Kamila Sadiqi for me, at least not when I'm reading about them.  It's that willing suspension of disbelief that allows the pages of a book to pull me in, and lets me forget about everything else.  It's the way I need to read in order to truly enjoy it, and allow it to keep me sane.
Posted by Ryan at 2:00 PM

I read, therefore I am. No honestly, I do not have a great post like yours. I just read cos I have always read

What a fascinating post! I don't think I'm quite as complicated. I've always been good at reading and have always been able to just fall into a book. Books are familiar and stress relief and an escape all rolled into one. When I get really stressed or upset about something my tell is reorganizing bookshelves. Even just the handling of the books themselves is comforting. When I was in college a rough final was always followed up by a visit to a used bookstore near by where I could just sit and stare at shelves of books. I'm not really sure why this all is but it's always been like this. I've never understood how people just don't read for pleasure. As for the blogging I think we're all very interested in books and everything about them but it's hard tom find people who share our interests in real life because I think most serious readers tend to be somewhat introverted. And seriously? A carnival? Please tell me there's an about me kind of page that explains all this!

Well, the nice thing about us here as friends, you can move and we'll still be here. ;)

So glad you were into books, because that's how we meet. :)

Hope you are doing well.

This is a great post, not only is it a chance to explore and understand why you read but gives your followers a chance to learn a little more about you.

I swear, you really do need to write a memoir.

This is a great post, Ryan. I can definitely relate to it.

I find that readers tend to blog because we enjoy reading and talking about our books. Book Bloggers are some of the best commenters out there! LOL. Or so in my experience.

I've always been introverted- I grew up neglected and abused and in severe poverty and books became my escape from reality. Books became my best friends. I got to live vicariously through my books and escape the pain of life and they saved me.

I have never been and never will be much of an outdoorsy person- I love my music, books, and movies way too much. That's just who I am and I have stopped fighting against it.

Love this post, I think you really know for sure that something is a huge part of your life when it grows up with you in every aspect and phase of your life. I think that I read because it is a vital part of my life and it's so difficult to fully state the reasons why. This is definitely one of those things I love about reading - it's a relief from everyday life.
I just recently thought a lot about what books have shaped me into the reader I am today, so this was a nice post to read after that!

A fine post, Ryan. Thanks for sharing your thoughts on why and how you read. I used to read a lot in my teens and twenties and then there was a slack and now I'm reading a lot again, probably because things have settled down and the kids have grown up and that sort of thing. In spite of blogging about them I still read books for the pleasure of it. I equate the joy of reading books with playing chess and Scrabble, solving crosswords, and drawing and painting.

Excellent post Ryan! I'm another introvert who has few book friends IRL, so was thrilled to discover book blogging where I could share my love of reading with other bookaholics!

And I had to laugh at your comment about reading the encyclopedia instead of playing outside, as I'm strictly an indoors girl. When my mother insisted I go outside to play, I sometimes took a book with me and read on the back porch!

Hope that you decide to write that memoir one day, as I'd totally buy a copy! :)

Like everyone.. I think this is a good post too. I am sitting here sick (F U cold) and can't sleep because of it and thought... why not read some blogs.

For me... I read when I was young.. but then high school and early college I quit. I had this social life that was so important. Then I got married and moved to Alaska and was there alone a lot because at the time my husband was in the military. So I picked up books again. I loved it! Haven't stopped since.

What a wonderful post! Like you, I spent much of my childhood turning to books for solace and friendship. I am curious to know what percentage of avid readers grew up feeling that -- in some way -- they didn't "fit in" and struggling with loneliness. I also remember perusing encyclopedias for fun.

Great post--you had me at traveling with carnivals and biker gangs!

Unlike you, I never moved around as a child, but gravitated to books for many of the same reasons, and now I find reading is an essential part of every day...if I don't read a certain amount each day, I feel slightly off-kilter.