The Death of Lucy Kyte by Nicola Upson 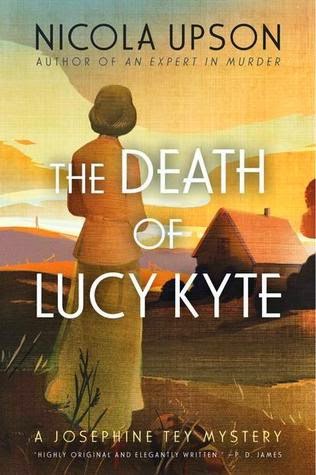 When Josephine Tey unexpectedly inherits Red Barn Cottage from her estranged godmother, the will stipulates that she must personally claim the house in the Suffolk countryside.  But Josephine is not the only benefactor - a woman named Lucy Kyte is also in Hester's will.

Sorting through the artifacts of her godmother's life, Josephine is intrigued by an infamous killing committed on the cottage's grounds a century before.  Yet this old crime - dubbed the Red Barn murder - still seems to haunt the tight-knit village and its remote inhabitants.  Is it just superstition, or is there a very real threat that is frightening the locals?  Could the truth be related to the mysterious Lucy Kyte, whom no one in the village admits to knowing?

With a palpable sense of evil thickening around her, Josephine must untangle historic tragedy from present danger and prevent a deadly cycle from the beginning once more.

Nicola Upson, Jacqueline Winspear, Charles Todd, and Susan Elia MacNeal, now you may be asking why I'm just listing a bunch of authors at the beginning of a book review, well good question.  For a reasons, I will get to in a second, these authors are all tied up together in my head.  First of all, they are all set around the same time, in the same country.  Basing mysteries in England, around the two World Wars, will automatically link them together.  For me, it's more than that though.  They aren't the only author's who are writing about that time period, nor are they the only authors who are doing it with mysteries, but they are a group of writers who are doing it with a certain narrative style and "feel" to their books.  I've said it about all their books before, but their is a "gentleness" to the narrative, even when they are talking about horrific murders and people destroying lives all around them.  I'm not even sure, nor have I ever been able to, explain what I say, but if you have read their books, I hope you know what I'm talking about.  The easiest way I can say it, these books, though they are mysteries, make me feel comfortable.

This is only the second book I've read in the Josephine Tey series by Nicola Upson.  The first book was Two for Sorrows, and I read that way back in 2011.  Going into it, I was a little hesitant, simply because the main character is a fictionalized version of a mystery writer.  A lot of authors butcher that concept, either changing the character so much, that they have nothing in common with their real life counterpart.  Or they do the exact opposite, keeping so faithfully to who they were in real life, that they just should have written a biography of them.  A good author, which Nicola Upson is, will combine real and fictional, paying homage to the character, allowing them to come back to life for an audience who may not already be familiar with them.

Like Two for Sorrows, the narrative pace is slow and relaxed, which allows the past to mingle with the present.  It allows the two time periods to meld together, which creates a smooth flow to the story.  There is not harsh jumping back and forth, nor is there any sense of disharmony between the two plot points.  For what it's worth, while there is a sense of danger and mystery to what's going on around her, it doesn't over shadow the story of the Red Barn murder, nor that of Lucy Kyte.  It's actually made me want to read about the actual Red Barn murder case.

Even though I'm reading this series out of order, which is making the relationship between Josephine and Marta a little confusing to me, I love the fact that the author is not shying away from Tey's sexuality.  Until recently there has been this habit of whitewashing or ignoring the sexuality of famous gay or bisexual people. I'm glad that we seem to be correcting that wrong, which allows us to fully understand our past, and our literary history.

I've read a couple of her books and liked them all. This sounds another good one. A new one for me anyway so thanks for the update.

This sounds quite good. I love the way you described the development of Josephine's character, finding a balance between being rigidly faithful to the actual person and not reflecting the real person at all. It sounds like this was very well done.

I just got the first one in the series and am really looking forward to it. I'm a big fan of Tey's work but don't know much about her as a person. I like the sounds of this one so this will definitely be a series I pursue!

I know exactly what you mean about the "feel" of this author and the others you mentioned, and I couldn't agree more. I haven't read Upson's series yet but the others all have that same feeling for me.