A Face In The Crowd by Lynda La Plante 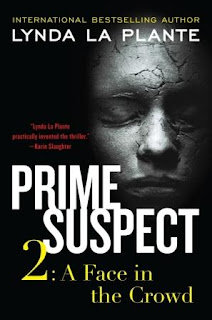 The coroner's report identifies the body as young, black, female, and impossibly anonymous.  Yet one thing is clear to Detective Chief Inspector Jane Tennison about the latest victim discovered in one of London's poorest districts - that news of her murder will tear apart a city already crackling with racial tensions, hurling Scotland Yard and Tennison herself into a maelstrom of shocking accusations and sudden, wrenching violence.

Even as London's brutal killer remains at large, Tennison remains locked in a struggle to overcome of her station house's brutal chauvinism and insidious politicking.  And as the department's deeply rooted racism rears its head to overshadow every facet of her new investigation, the trail of her prime suspect is growing colder.  Worse, when the details of the beleaguered detective's stormy personal life explode across the headlines of London's sleaziest tabloids, Tennison's already frenzied determination to bring the killer to justice will be catapulted into obsession - one that could send her spiraling over the edge.

I'm not sure what to say about this one that I didn't say about the first book in the series, Prime Suspect.  So I must humbly beg your forgiveness if this review is a bit shorter that either one of us would have liked it to be.

Jane Tennison, as much as I loved her in the previous book, I fell even harder as I read A Face in the Crowd.  She isn't the nicest or most sympathetic of characters, but there is just something so deeply flawed and fragile about her that I can't help but find her both sympathetic and endearing.  She is someone who has to constantly work the angles and play her cards right in order to not just get ahead, but even be allowed to play the game.  She is in constant fight mode, which wreaks havoc with her personal life but seems to benefit her as she fight in a male dominated workplace.

She is one of those characters that most of her colleagues don't like, but respect her abilities.  She is viewed in a rather sexist way, judged for actions and attitude that would be admired in a man.  When I read books like this, I always wonder how much of this actually goes on in the workplace.  I'm sure it's contingent on what the job is, homicide detectives probably being one of those that does have a bit of sexist overtones to it still.  But, what do I know.  I'm neither a homicide detective or a woman, so I really have no clue on what it is really like.

As much as I love Tennison, what has really been making me fall in love with this series are the mysteries themselves.  Lynda La Plante has such a wonderfully detailed style that somehow manages to keep the story simple and realistic.  None of the details seem unnecessary or out of place, but it's the depth of those details that makes every word and action on the page, jump off and embed itself in my imagination.  I got lost within this world and the back story of this brutal crime.  And by the end, I was content with the outcome and just a bit pleased with the fact I didn't see all of it before hand.

I'm glad you liked this book but, I have to tell you, that cover freaks me out.

Getting lost within the pages of the story is always a good sign that the writing is good!!!

Sounds like this series is getting better and better!

Sounds like a series I need to pick up. I love getting lost in a book, even though that does sound odd when it's a book dealing with murder.

A few years ago I first heard about LaPlante on an NPR show but never have read a review of one of her books. Glad to know that they are as good as touted. Now I'll know to pick one up!