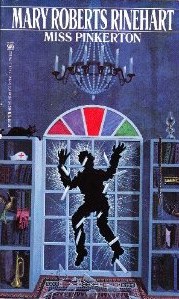 Hilda Adams hardly considered herself a detective.  She was, first and last, a trained nurse - whose shrewd mind and quick eye just happened to have been invaluable to Inspector Patton of the Homicide Bureau on one of two occasions.

The Mitchell case was apparently going to be one of them. Old Miss Juliet had endured quite a shock when her nephew committed suicide and Hilda was determined to keep an eye on her.  But the old lady wasn't as frail as she looked, judging by the vanishing trick she performed at night.  And Hilda began to suspect she had on her hands either a murder disguised as a suicide - or a suicide disguised as a murder!

Before anyone starts to sigh and grumble about having two Mary Roberts Rinehart reviews in a row, I'll let you know there is one more coming this week as well.  There will be another one in between, but I'm having to get caught up on these or I'll drown under a sea of read books.  Besides, how can you complain about one of the greatest mystery authors to ever walk the surface of the Earth.

Now while Miss Pinkerton is the name of this wonderfully crafted mystery, it's not the first book to star Miss Pinkerton, Hilda Adams.  I will say that the next review of her books is another Miss Pinkerton novel.  I have a sneaky suspicion that reading these in order would have been better, at least as far as following her relationship with the inspector.  Other than that point, I think reading these out of order is just fine.  It's the mystery and the characters that seep through the pages and into you brain, not the timeline.

Hilda is one of those characters that I can imagine myself having tea with, before a roaring fire, and having a chat about anything that came to mind.  She is intelligent, determined, and loyal to her job and her patients.  She doesn't shirk from duty, even if it appears to put her life in danger.  She may complain about the long hours and lack of sleep, but she loves every second of it.  Despite her lack of police training, Hilda has a keen eye to see underneath the layers of red herrings and the personal facades of those she is around.

This particular mystery that Hilda finds herself involved with is one that I think Mary Roberts Rinehart is brilliant at telling.  I would say 95% of the action takes place in the Mitchell House.  Because of that, Rinehart is able to build such a claustrophobic experience for the characters and the readers alike.  It keeps everyone on pins and needles waiting to see what comes down a darkened stairwell or out of room that should have been empty.  The atmosphere hangs over the heads of everyone involved, making them suspicious of each other and just a bit paranoid.

It's a mystery crafted with skill and precision.  A mystery that involved characters that are never what they appear to be and enough clues and misdirections to have even the great Hercule Poirot confused and in doubt of his own reasoning skills.  It's the type of mystery that Rinehart is at her best, and I love every second of it.

Challenges: VM (Occupational Hazards)
Posted by Ryan at 12:00 AM

I just read my first Mary Roberts Rinehart novel, and I LOVED it. I will definitely be putting more of her books on my TBR shelf and checking out all your reviews. :)

Your review certain brings the book to life!

Your review certain brings the book to life!

You've convinced me that I need to try this author!

I'm keeping a list. One of these days I'll get around to reading more of hers.

I've never even heard of anyone else who has read any Mary Roberts Rinehart! I discovered her after I'd devoured Agatha Christie was looking for some other female Golden Age of Mystery writers. I haven't read the Pinkerton books, but I've read her stand-alones and enjoyed them. I think my favorite was The Great Mistake.
Ruby

Another amazing book to add to my list. I'm so in love with AC right now that I just know Rinehart will have to be added!!!

You know I'm not a huge mystery type of book person (well, throw in a paranormal aspect to it and I'm there...) but I know people who love it. I don't think she has read a MRR book. I think I will suggest it!

I think it's about time to crack open one of the MRR's on my eReader. I really must see for myself what all this fuss is about. *wink* Honestly, you know I trust your judgement.

Another MRR book that I've got sitting on my TBR pile. Now that I think about it, if I stretch it a bit "Pink" in Pinkerton, I could shoehorn this one into my Vintage color theme. Hmmm. May have to do that, 'cause, you're right, MRR is a pretty awesome mystery writer.