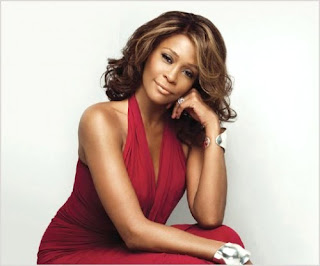 No matter how many times the death of a celebrity takes me by surprise or makes me remember a particular song or movie that moved me, I'm never prepared for something quite like the death of Whitney Houston.

I was at work tonight when I first heard the news.  One of my employees said he heard it on the radio, and I refused to believe him at first.  For some bizarre reason I thought he was joking, though why you would joke about something like that is beyond me.  I had to leave the store and go to one of the restaurants in the mall because they always have CNN on.  I stood there for about 5 minutes in a little bit of shock.  It's not because I personally knew her or even felt as if I did.  Instead it felt as if part of my childhood and young adult life has suddenly disappeared.

I can't remember a time in my life when I didn't listen to her.  She had one of those voices that moved me, even when I was too young to really understand the words.  I stayed with her through the 80s and 90s, hoping and praying that she would get away from a destructive marriage to Bobby Brown.  I cheered when she finally left him, and prayed for a big comeback.  Though she never regained the status she once had, she never faded in talent or strength of mind.  I loved her new music as much as I did her older hits.

She is a talent and human being who will be missed by millions.  I pray for her friends and family.  I for one will be one of those who will miss her new music that will never be created, but I will take comfort in all that she has done before.

These events are always a shock to me too. I've always enjoyed her music and beautiful voice. It's too bad that her life took such a tragic turn and she was overwhelmed by her addictions. It's so sad that her life was cut short and she's also left behind a young daughter. RIP Whitney.

When I started seeing this on Twitter last night, I was shocked and thought it was a false rumor too. What a sad way for such a talented life to end.

I couldn't believe it, either! What a tragic loss.

I'm going to watch a movie in which she starred, and which has always made me feel good...Waiting to Exhale.

I was in shock when I saw it on Facebook and immediately thought it was a hoax. Unfortunately that wasn't the case. I enjoyed her music in my teens and early adult life. I just think it's so sad for her daughter and the family that loved her.

I was on twitter, and didn't believe it either. Her music was such a part of my teen years. It always has and will have a special place in my heart. RIP.

I thought this was a hoax too, so you weren't alone. Such a sad life for someone so incredibly talented.

I was so surprised when my husband told me Whitney passed away this morning. Just a shame. And, I don't care how or why she passed, it's just a shame to see them go.

I didn't read about this until this morning when I was on Facebook. I too thought at first it was some joke as I had just seen a story on her on a magazine when I was in the grocery check out line yesterday.

Then I read a news report and my heart sank. Always beautiful, an amazing voice, and I loved her in The bodyguard.

Such a sad sad happening.

She was amazing, it's such a loss. Her first album came out when I was 11 and I can remember singing her songs on the swing set in our backyard.

I am just like you. I have loved her through all of the stages of her music life. I, too, rooted for a comeback. I loved her newest album. I watched Being Bobby Brown and wanted to save her. She represents so much of my childhood, I feel a hole without her there.

So sad. Thanks for posting this.

I totally agree. I have always loved Whitney Houston's music. She was beautiful and talented. It makes me sad when people quickly said "It's the self destruciton! It's the drugs! She did this to herself". REGARDLESS, she was a human being who rocked the 80s and 90s and gave many of us the soundtrack of our lives, she may have been a megastar but the bottom line is: she was human. She was a mother. A daughter. A niece. She will be GREATLY missed. RIP Whitney!

Yes, this was another of the shocking celebrity deaths as of late. Sad too...she really was a bright star once upon a time...and in my mind will always be remembered as such.