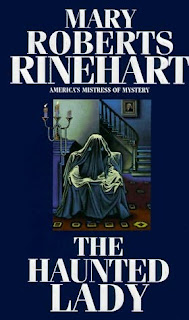 Wealthy Eliza Fairbanks may have been old and delicate, but she was hardly senile.  So when she claimed to have found bats in her bedroom and arsenic on her strawberries, Miss Pinkerton was promptly assigned the case.

The shrewd nurse-detective watcher over Mrs. Fairbanks, but apparently someone else was watching even more carefully.  For soon the old lady's worries were over.  And unfortunately, so was her life...

There is just something amazing about the atmosphere that Mary Roberts Rinehart can pack into a small piece of real estate.  Once again, she showcases her talent by setting a murder mystery in a home that is inhabited by some very strange people.  You would think that after a while, all these mysteries that take place in spooky houses would become repetitive.  I think with lesser authors, that is a real big possibility.  With Rinehart at the quill, quite the opposite happens.  There is something so refreshing about her motives, characters, and the structure of the murder itself.  Her books are able to capture my imagination no matter how often I've encountered the basic plot line.

The Haunted Lady is no exception to that rule.  For only the second time I had the pleasure of spending time with Hilda Adams, Miss Pinkerton.  This book takes place a few years after Miss Pinkerton, which simply means I have some back reading to do.  Hilda is older, a bit wiser, and the interest in her from "her" inspector seems to be getting the two of them closer together.  She is, once again, sucked into a murder mystery by the inspector, though that's not what it appears to be at first.  When Hilda is first approached to enter the home, it's a babysitting assignment.  Figure out why Eliza Fairbanks thinks someone is out to get here.  Sadly for Ms. Fairbanks, it's quickly becomes obvious that someone was out to get her.

It doesn't take long for our Miss Pinkerton to start putting her nose and intellect into the happenings in the house.  She has a lot of characters and family dynamics to explore and she has no qualms about doing it.  After only two encounters with her, Miss Pinkerton, much like her creator, has become one of my favorites to hang around with.  I'm really looking forward to seeing her at work in the future.

You've convinced me - I have to try this author!

I love that you read these kind of books. :)

I agree so much--there really is a fresh vibrancy to her books that makes them really enjoyable. And I found The Bat on Project Gutenberg, yay!

I am going to start looking for her books...I want to read this author's works!

I just found a ton of them at my public library...I feel a little dumb for not checking there first!!

I hadn't heard of this author but I'm definitely intrigued. And your review convinced me that I must give her a try! Thanks!

Ooooooh, this sounds good, Ryan. Loved reading your review especially since you don't give any 'spoilers' away. Much appreciated.

I haven't read this one, but I'm going to get my hands on a copy for sure. :)

Sounds like another good one and that cover...truly creepy! Great review.

Was at The Original Whistle Stop Cafe for the 1st time last week. Was kept from leaving due to 3 trains coming through the area and went into Dogg Gone Books, used bookstore, and found "Haunted Lady",published in 1942, by Mary Roberts Rindhart. Started reading and could not put down. I normally do not read mystery by this one is VERY tastefully done and for once I did NOT have it figured out before the end.
BTW the original printing (1942) does not have the "The" in the title. I do have the 1st printing copy of the book.
MUST READ!