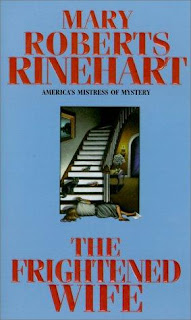 Anne Collier was certain that her husband, Fred, was trying to kill her.  The terrified beauty immediately went to probate lawyer Wade Forsythe's office to have a will drawn up.  In the event of her untimely demise, Anne wanted her hidden fortune in the hands of her six-year-old son, Billy, and out of the greedy grasp of her unsavory spouse.

But tides then turned.  Fred was put abruptly out of the picture by a bullet through his skull, Anne was confined to a hospital bed in an apparent botched suicide attempt, and little Billy has disappeared.  The frightened wife was not a frightened widow and, as far as the police were concerned, a cold, premeditated murderer.  But Forsythe knew Anne had to be innocent.  And he'd lay his career on the line... and perhaps his life as well to prove it.

This is the second time that Mary Roberts Rinehart has tricked me.  With her wonderfully composed teasers on the back of every paperback book I pick up, I'm instantly convinced that I'm about to dig into an elegant example of her brilliant mind at work.  I was sure that I would spend all 286 pages with Wade and Anne as they tried to defend her innocence and find the real killer who left her husband dead and her bleeding on the floor.  Boy was I wrong, instead of 286 pages, all I got with them were 116 heart pounding pages that had me on tenterhooks the entire time.  As it turned out The Frightened Wife isn't just the title of the book, it's also the name of the first of 5 well crafted short stories that Mary Roberts Rinehart was able to spring on me.  I really think I need to start checking the table of contents when I pick one of her books up.  This is the second time I picked up a book expecting a novel, and getting some of the best examples of mystery short stories.

Unlike the previous collection of her short stories, all 5 of these little gems featured my favorite crime of all, murder.  There is just something so glorious and fulfilling when you read about a bloodthirsty murderer being caught and either sent away or allowed to take a bit easier way out.  With each one of these stories, Rinehart shows of a mastery of storytelling that I don't think many of today's mystery authors could achieve.  The labor and pure genius it takes to display a meticulous crime and it's ramifications in such a short space of time, blows me away every time I happen to run across it.

I already have two other books of hers finished, both of them full length mysteries.  Hopefully I will be able to get to those reviews and the other various ones waiting to be written soon.  In the meantime, if I haven't convinced you to try this author out yet, please do so soon.  I promise you won't be sorry.

Selling me on another book! I have a funny story for tomorrows morning meandering and heads up... its going to include you! Dont be afraid...LOL, its just a crazy thing I did.... that I thought included you and well.... well, you'll see....

Your enthusiasm for her work really makes me want to give it a try.

I haven't read any of her short stories yet, but I do enjoy her full-length ones.

But if you checked them al lthe time you wouldn't get to be pleasantly surprised!!