Before I Go To Sleep by S.J. Watson 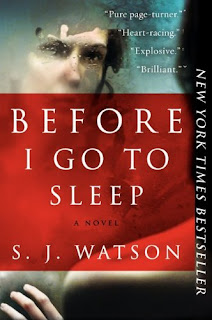 Memories define us.  So what if you lost yours every time you went to sleep?  Your name, your identity, your past, even the people you love - all forgotten overnight.  And the one person you trust may be telling you only half the story.

Ever since I finished reading this book I've been trying to remember when I watched Memento for the first time.  I know it was while it was still playing in theaters, though the only one in Wichita that was showing it was a smaller theater that specialized in less mainstream films,  Sadly, both their locations have closed since then.  So lets say, early 2001 was when I fell in love with the movie for the first time.  Thankfully, I will not have the memory issue with Before I Go To Sleep because I will have the blog to always remind me.

Now, apart from some superficial similarities, Memento and this novel are not the same thing.  They aren't even close.  While they both involve problems with memory and trauma, the movie is a revenge thriller while the book is more of a psychological thriller.  They both have their moments of terror, though I must say the written word and what it allows your own imagination to conjure has any movie beat hands down.

Now that I got that confusing mumbo-jumbo about absolutely nothing out of the way, lets get down to the book.  From the instance that Christine wakes up in a bed she doesn't recognize and a man who looks way too old for her, I was hooked.  The apprehension, confusion, and abject terror that would ooze off the page at various points along the journey kept me going when part of my brain were trying to play catch up.

Christine is one of my favorite kinds of characters, the unreliable narrator that can't be counted on to tell the whole truth.  In most cases, it's because the narrator is trying to hide something from the reader.  In this case, it's because Christine really doesn't know what's going on and has to rely on what her husband tells her and her own journal entries from the day(s) before.  For her, everything is secondhand knowledge.  As the story progresses parts of her memory seem to come back, but it's never very clear if it's because she just read about it in a journal or if the brain is actually trying to repair itself to get her out of an ever growing sticky situation.  She has serious problems trying to figure out what is memory, what is truth, and what are flat out lies.

While I found the premise and plot points to be engaging, I found nothing in the book really surprised me and that the storyline was pretty predictable.  I'm not saying predictable is a bad thing, at times it can actually be the opposite.  In this case, I'm not sure it really had any impact on my enjoyment of the story.  Even the parts that seemed a little far fetched kept me entertained enough to continue on Christine's journey.

The only real issues, and while they may sound major they really didn't turn me off the book, I had were in the way her family are depicted and the frantic nature of the climax.  I know that in any book we are supposed to use our willing suspension of disbelief, but there comes a point where things just don't make sense.  How could people in her life, who are supposed to love her, allow things to get this far?  I just find it hard to believe that despite how painful it must be to be around someone who doesn't remember you when they wake up everyday, that you would completely walk away and allow the "mystery" in this book to happen.

As far as the pacing of the end goes, I'm getting used to it, but that doesn't mean I have to like it.  It just seems that too many books are ending in the last few pages with so much kinetic energy spilling off the page that I'm concerned the book itself may catch fire.  Everything seems so rushed anymore.  I'm sure it's somehow supposed to build up tension, but it rarely ever works out that way for me.  For the most part, and I'm including this book, is just seems that the frantic nature does more harm than good.  I would have rather had more of an emotional payoff as opposed to a rushed action scene.

Overall, I think the book was great for what I needed it for.  It was pure escapism for me, but not something that I'll be in a big hurry to read again.

I would like to thank Trish of TLC Book Tours for the opportunity to read/review this book.  Please visit the tour page for more reviews.

I had really enjoyed the first part of the book but towards the end I felt like the tension kind of fizzled out, though it's been a while since I read it so I can't remember what the problem was exactly. I was also dubious about the fact that the people in Christine's life could have allowed any of this to happen. Too many of the misunderstandings were too convenient. But I still enjoyed the story for the most part.

I do want to read this on even though the reviews have been mixed. Glad you seemed to enjoy it.

I thought the whole premise of this book was good and I enjoyed it when I read it. Yes, the ending is too quick, but I still have good thoughts about this book even though it's been months since I read it

I really liked Before I Go to Sleep - but totally agree that there were some parts that seemed a bit unbelievable. And you so perfectly expressed what I have also been finding at the end of a lot of the books I read - the pace gets so frantic, that nowadays when it starts happening, I read a few pages at a time, take a break and then come back.

I'm just the opposite - a movie can scare me far worse than a book can. I guess I can tone things done when I don't have a picture before my eyes. This book sounds good to me.

I was not fond of the film, Memento. I'm a huge fan of Guy Pearce, but the movie to me was very confusing and I'm not easily confused. After reading your review, I'm on the fence on whether I want to read this now or not. It does sound like something I would like and I too like the unreliable narrator (think The Lace Reader) so I may give it a whirl if I happen upon it at a library sale or such. Great review, as always, Ryan.

Very nice review -- even-handed and thorough. I enjoyed this enough but wasn't about it -- at the time, the tension propelled me but now that I've finished, it's kind of gone out of mind. The ending wrapped up way too neatly for my tastes.

Nice review! I really liked this book too, but it did bother me that her family and friends acted the way they did. I think they could have tried harder.

And I couldn't agree more about rushed endings! It's as though the author suddenly realizes that they have to wrap things up as they're running out of pages or something! Very annoying trend!

I'm still undecided about this one, I'm really fussy with my thrillers but nothing like pure escapism now and again. Great review Ryan :)

I don't think this is for me, because of the pacing and the people in her life. I think I would have to throw that book across the room on occasion. I have been curious about this book since I've seen it so I'm happy you reviewed it.

You enjoyed it more than I did. I couldn't get passed the first 50 pages. I found it to be boring, just me. It was during my rut reading time though. Nice review!

Hmmmm..yours is the first so-so review I've read of this title. Now, I'm hesitating as to how bad I want to read this one! Excellent review!

I really enjoyed the book and didn't mind the ending. The audio book is great with Orlagh Cassidy as narrator. she's excellent and perfect for this book. see my review: hmm, I thought I had posted my comment. please delete if it's a repeat.
The book so so well done and full of suspense, that I didn't mind the ending. I listened to it, with the terrific Orlagh Cassidy as narrator. excellent. see my review: http://wordsandpeace.com/2011/11/21/83-before-i-go-to-sleep/

Sometimes all I really want is that pure escapism, especially when there's a lot going on in the rest of my life. I'll keep this one in mind for when I'm totally stressed!

"Christine is one of my favorite kinds of characters, the unreliable narrator that can't be counted on to tell the whole truth."

I loved this statement and couldn't agree more! I really enjoyed this book when I read it and found myself engrossed between the pages. I would definitely read more by this author in the future! Great review!