The Dispatcher by Ryan David Jahn (Plus Giveaway!) 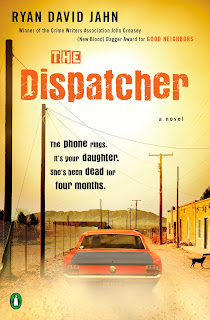 Ian Hunt is a police dispatcher in East Texas.  Just as his shift is ending he gets a call from his fourteen-year-old daughter - who was declared dead four months earlier.

The call is cut off by the man who snatched her from her bedroom when she was seven.  A basic description of the kidnapper is all Ian has to go on.

The trail leads to a local couple, but this is just the start of Ian's fight to get his daughter back.  What follows is a bullet-strewn cross-country chase from Texas to California along Interstate 10.

I can't recall a ton of books that I've read over the last few years that deal with a father doing everything they need to do to protect their child.  Other than Cormac McCarthy's The Road, my brain is a little stumped trying to remember another book that I've read, that deals with the specific relationship of father and child.  I don't even think I could name a book I've seen reviewed somewhere else in the last few years that reflect such a perspective.  I could name off tons of book that deal with mothers protecting or rescuing their kids, but not fathers.  I'm not sure if it's just that I'm not being exposed to the books, or if it's because they aren't being written.  Whatever the explanation, when I read the synopsis of this book, I jumped at the chance to read it.

From the get go, Ian and his fight to get his daughter back kept me on the proverbial edge of my seat the entire time I had the book open.  It was one of those reads that I didn't necessarily want to put down, and only did so under duress.  Ian is a emotionally crippled man who has had to deal with the abduction of his daughter seven years ago, a horrific experience that has destroyed every other relationship he had.  His wife left him for another police officer.  The relationship with his son, who was in high school at the time of the abduction, is damaged beyond repair.  Ian could not help but blame him for his sister's abduction.  He never wanted to feel that way, but sometimes the brain really has no control over how someone is going to react.

From the moment Ian receives that phone call, he is racing against time.  He doesn't know what the kidnapper will do now that he is in danger of being found out.  When the bodies of 3 other female toddlers along with the nightgown Ian's daughter was wearing the night she disappeared are discovered on private property, they get the break they need.  I'm not going to even get into how the bodies were discovered because it's the result of one of those seemingly random events that can get you into trouble, even if you don't realize it at the time.  But the way it happens is brilliant and never seems to be unbelievable.

When the initial contact with the suspect ends up with two officers dead and Ian in the hospital, it's up to Ian to get his ass in gear and save his daughter on his own.   He leaves the hospital and sets out on a crusade to get his daughter and his life back.  He does something that I'm sure some out there would find to be over the top or out of character, but I'm pretty damn sure I would have done the same thing Ian does.  If someone had knowledge of where my son was at, and would not spill the beans, I would do everything I had to do to get that information.  Rescuing my son would comes first, consequences can be dealt with after my child was safe.

What follows is a car chase across barren deserts and abandoned towns.  It's a chase filled with violence and blood shed.  Innocent people lose their lives along the way, people who were just trying to do the right thing.  It's a bloody journey that I would pray no father would ever have to make, but it's a journey that any father should be willing to embark on in order to protect their child.

I would like to thank Lisa of TLC Book Tours for the opportunity to read and review this book.  Please visit the tour page for other reviews and additional chances to win your very own copy.

Now onto the giveaway.  One lucky reader will win a copy of The Dispatcher.  All you have to do to enter is leave a comment with your email address.  It's as simple as that.  The giveaway will end on 3/15/12 at 11:59 PM CST.  I will select the winner using random.org and will then email the winner.  The winner will have 48 hours to respond or a new winner will be picked.

This sounds like a book I would enjoy. Thanks for the review and would love a chance to win a copy. ziaria(at)gmail(dot)com

I've been wanting to read this ever since I sadly turned down a chance to blog tour with this book. Enter me please!

I do think your right - most of the books written about a parent fighting to save a child are focused on the mother and child. This sounds like a real page turner.

Ryan, Great review I agree as I was given the opportunity to review it as well. Just an FYI, my General Fiction book club is going to read and discuss this in August and I would LOVE to have you join us in the conversations.
Deb

Honestly, I'm on the fence about this one. I don't know if I could keep it in my hands to read. It sounds like a book I might end up throwing to the wall a time or two. LOL

Still, you have me curious about what kind of father he becomes in the end and what happens to the daughter.

I'm reading this book now and I can barley put it down.

Great giveaway ; book sounds really good -- I have the eGalley

You're right, there is very little fiction about GOOD fathers taking care of their children - we definitely need more of that!

Sounds like a page-turner - I would love to win a copy!

This sounds really good, Ryan. Please enter me in the contest.

I like this kind of hell bent for leather story when a parent does all they can to get their child back.

I know I would.

This one sounds amazing!! I'm going to make sure I read it!!! And you're right not often is it the father who goes after their child. Loved your review!

Intriguing, to say the least. Now, FOR SCIENCE!

A thriller like this, with a callback to The Road. My interest is definitely piqued.

I do love a good thriller.

The review really makes me want to read this book. Thank you for the giveaway. jtretin at aol dot com

I would LOVE to read this book. That's all. email: dmarinese89@yahoo.com

This book is an excellent choice for a giveaway. Thanks!
carlscott(at)prodigy(dot)net(dot)mx