Mailbox Monday is a weekly meme created by Marcia at A Girl and Her Books and is being hosted all this month by Metroreader.

I know I'm a glutton for punishment, but sometimes I just can't help myself.  After reading my first Maise Dobbs book last year, when I was given the opportunity to read more for an upcoming TLC Book Tour, I jumped at the chance.  I wish I could have reviewed all of them, but I'm not that good.  So instead I went with the first two and the last two.  So I got trade paperbacks of Maise Dobbs, Birds of a Feather, and A Lesson in Secrets by Jacqueline Winspear.  I also received an ARC of Elegy for Eddie by her as well.

The last time I was in Barnes & Noble I decided to order two books that they didn't have in stock, well they came in last week and I was able to pick them up.  I wanted The Woman in Black by Susan Hill, but didn't want the movie tie-in cover, so I got this trade paperback instead.  When I reviewed The Moonstone by Wilkie Collins, I couldn't find a picture of the cover I had on my edition, so I used this one instead.  I just assumed it wasn't available but when I was looking on line a few weeks ago, I found it.  So I ordered it, and the fact that it's a hardcover is just a bonus. 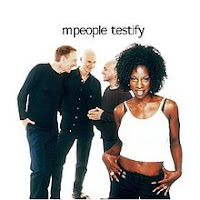 I was perusing a used music store looking for Whitney Houston's Greatest Hits and was disappointed when the didn't have it.  I looked through their clearance section, 3 for a $1, and found one CD that I wanted.  So I picked up Testify by M People for thirty-three cents.

Lots of Maisie Dobbs there!

I have just read the second book and really enjoyed it, so I am hoping to work my way through the series soon, but probably slowly!

Enjoy them all. They are new to me so will enjoy your reviews.

You hit the jackpot Ryan. Enjoy and have a great week.

My mom loves the Maisie Dobbs books so I think you're in for a treat! I don't like movie tie-in covers either.

I have yet to read book one of Maisie's adventures! I will be doing that some time this year. I can't wait for your reviews!

I received the first and last Maisie Dobbs book. I am looking forward to reading the series. Good to know you have read one and loved it!

A nice mailbox, The Woman In Black caught my eye.

I have read a few of the Dobbs books and liked them :D

looking forward to your thoughts on the Winspeare books. Have a good week, Ryan,and happy reading!

I bet there will be more Whitney CDs out with a best of. She had such a great voice. Btw, curious about the Woman in Black. I am wondering if I can handle the movie. I'm such a wimp when it comes to scary movies! LOL

Nice haul Ryan! And you can't beat a 33 cent CD! Hope you enjoy!

The Winspear books are gorgeous, and I totally want to read the Woman in Black. In the daylight.

Wow, four books to review from the same author. I admire your mettle! I'm SO jealous of The Woman in Black. I loved the movie and I know the book is bound to be better. I think I have The Moonstone as well.

Hmmm, I'm trying to recall what songs were sung by M People. What a great deal you got for it!