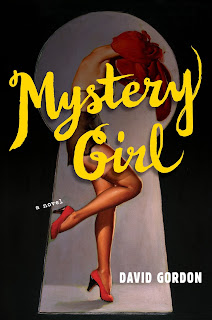 When Sam Kornberg's wife, Lala, walks out on him, he's an unemployed used-book store clerk and failed experimental novelist with a broken heart.  Desperate to win her back, he takes a job as assistant detective to the enigmatic Solar Lonsky, a private eye who might be an eccentric and morbid genius or just morbidly obese madman.

It's a simple tail job, following a beautiful and mysterious lady around L.A., but Sam soon finds himself helplessly falling for his quarry and hopelessly entangled in a murder case involving satanists, succubi, underground filmmakers, Hollywood bigshots, Mexican shootouts, video-store geekery, and sexy doppelgangers from beyond the grave.  A case that highlights the risk of hardcore reading and mourns the death of the novel - or perhaps just the decline of Western civilization.

I feel like Artax being sucked down in the Swamp of Sadness, unable to escape his fate.  Now forgive my hyperbolic language, but I'm not sure I have any other way to explain myself.  Before anyone gets too upset with me, I'm not comparing the book to the Swamps of Sadness.  Instead, I'm comparing my unwillingness and despair at having to write a review of this book, to being sucked down into the mud, never to raise again.

It's not because I didn't like the book, though I can honestly say it's not my favorite, but it has more to do with the fact that I really don't have anything to say about it.  If I had nothing but negatives to explore, it would be easier for me to sit my butt down and write something up.  Instead, I'm left with feeling rather panicked over the idea of writing this review.

I guess I could say that I enjoyed the characters and found them to be interesting, despite all the craziness going on around them.  There are even a few of that I would like to know personally.  I may even choose to comment on the fact that much like These Things Happen by Richard Kramer, the book felt too forced for me to really enjoy.  Everything, for me at least, read as if the author was trying too hard to be clever.  And that's all I really have to say, I don't even feel like going into a lot of explanation on why I feel this way.  Maybe I should just let the mud of the Swamp of Sadness swallow me up.

I would like to thank Lisa of TLC Book Tours for the opportunity to read/review this book.  Please visit the tour page to read other reviews, hopefully some that actually had something to say.

Glad I found someone who had a similar reaction to the book as I did!