An Incomplete Revenge by Jacqueline Winspear 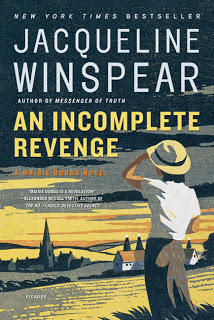 With the country in the grip of economic malaise, Maisie Dobbs is relieved to accept an apparently straightforward assignment to investigate a potential land purchase.  Her inquiries take her to a picturesque village in Kent during the hop-picking season, but beneath is pastoral surface she finds evidence of something amiss.  Mysterious fires erupt in the village with alarming regularity, and a series of petty crimes suggest a darker criminal element at work.  A peculiar secrecy shrouds the village, and ultimately Maisie must draw on her finely hones skills of detection to solve one of her most intriguing cases yet.

I am wishing I had read the entire series in order, instead of reading some of the later books before these middle few.  I think I would have understood Maisie and some of the, well I don't want to say mood swings, but I'm not sure what else to call them, that she experiences later on in the series.  It was nice to see James Compton, and the beginning of the relationship he has with Maisie later on.  Though it's still business at this point in time.  I'm actually hoping against hope that when I catch the books on the other sides of those I've already read, that they are still together.  If not, I'm going to be heart broken.

I know, especially when I started the series, that I would comment on the gentleness of the tone, that it's not a hard hitting mystery series.  I'm starting to think that I was using the wrong term, but again, I'm not sure what else to call it.  Despite the horrors of what happen to the victims in these books, I'm never tense or on edge.  There is something about the author's style, Maisie Dobbs herself, and I think the pastoral settings that so many of these books are set in, that I find myself relaxed the entire time I'm reading them.  Even when I'm reading about the real physical violence done out of ethnic hatred, I'm enjoying the story for what it is.  I'm not stressing out or having any sort of negative reaction to what I'm reading.  Honestly, I'm still not sure I'm explaining myself all the well, so I'm going to stop rambling on this point.

As for the mystery itself, it's heartbreaking in it's simplicity, and shocking in it's cause.  I know, that the crimes in this book, have actually taken place.  But it's always painful to be reminded of how far we can be driven by fear and hatred, how ordinary people can be scared into doing something so violent and so horrible, that they live with the shame and guilt the rest of their lives.  It's a sad testimony to human frailty, I just wish it didn't exist in real life.

Thank you for a very good review. I've read just one book from this series and would like to read more.

I read the first 3 and I wish the library had more :/

Ryan what an eloquent review
thank you

Excellent review! I read one Maisie book out of order and didn't love it and would like to go back and start them from the beginning.

I know, I know...I've been terribly lax in stopping by. Catching up!

This is a great review, Ryan. I can tell you really like these books. There are so many books out there and I have to think to myself if I really want to start another series. This one definitely sounds interesting. I will have to start watching for her books at library sales.

One of these days I'll read this series thanks to your reviews Ryan. I have the first couple of books and I'll definitely read in order, I have a 'thing' about that lol