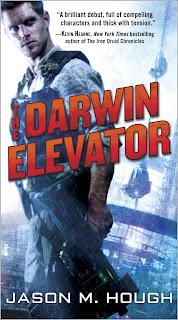 In the late twenty-third century, Darwin, Australia, stands as the last human city on Earth.  The world has succumbed to an alien plague, with most of the population transformed into mindless, savage creatures.  The planet's refugees flock to Darwin, where a space elevator - created by the architects of this apocalypse, the Builders - emits a plague-suppressing aura.

Skyler Lukien has a rare immunity to the plague.  Backed by an international crew of fellow "immunes," he leads missions into the dangerous wasteland beyond the aura's edge to find the resources Darwin needs to stave off collapse.  But when the Elevator starts to malfunction, Skyler is tapped - along with the brilliant scientist Dr. Tania Sharma - to solve the mystery of the failing alien technology and save the ragged remnants of humanity.

I hate science fiction.  There I said it.  I feel as if that weight everyone keeps talking about, is off my shoulders.  I find most of it to be heavy handed, too preachy, and full of so much technobabble that I have a headache within minutes of reading it.  In the past, I have found a few exceptions to my disdain for the genre, but they have been few and far between.  The Dune series by Frank Herbert, Aristoi by Walter Jon Williams, and a few series, like The Emberverse books by S.M. Stirling, that mix science fiction with fantasy; are a few of those shining stars in an otherwise dark firmament.

I'm still not even sure why I agreed to review The Darwin Elevator.  And as I started the book, I was kicking myself for that decision.  I was finding myself bogged down in the back story, the vocabulary was getting on my nerves, and I really don't like stories set in space, even a little bit.  I also think I was still annoyed over the book, Mystery Girl by David Gordon, that I had just finished reviewing, prior to this one.  But I refused to give up on it, I figured I would just have to suffer through.  I know I don't like science fiction, so it was my own damn fault for agreeing to review it.

Then something changed in me about halfway through the book.  I was actually enjoying myself and getting lost in the action.  I was really liking Skyler and Tania, and everyone else they were friends with.  I found myself hating the guys I was supposed to hate, and cheering for them to die.  I became interested in the questions they were asking about the Builders and what the master plan was.  I got caught up in the quest to find the new elevator sight.  I was just as intrigued by the movable structures as Skylar was.  And quiet honestly, I'm really needing to know what happens next.  I'm not sure when I'll get to find out, but I can't wait for the opportunity.

I would like to thank Lisa of TLC Book Tours for the opportunity to read and review this book.  Please visit the tour page to read other reviews.
Posted by Ryan at 12:38 AM

Lol, I am with you. I hate it. But there are exceptions like Dune and the Hitchhiker's guide

I was kind of surprised to see you reviewing this book. I'm glad to see you ended up enjoying it.

Hi Ryan, glad your horizons were (while kicking and screaming) broadened :)
Sounds like a great read for this Sci-Fi lover

Kudos for reading out of your comfort zone, it's very important.

YES! I'm thrilled that you stuck with it and ended up getting so involved in the story!

Thanks for being on the tour Ryan. :)

Glad you started to enjoy it. :) Sci Fi isn't so bad, but it's a touchy field depending on the author and the content they want to use. :)