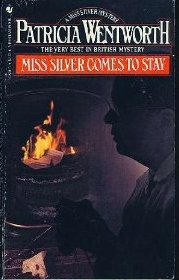 Everyone in the tiny English village of Melling was terribly interested in what would happen now that James Lessiter had returned at last to his ancestral home.  A few nosey parkers whispered that even after twenty years Rietta Cray would still want to marry him.  Nobody guess he might murder him.  At least not until the butler found him dead at this writing desk, his head bashed in with a poker and Rietta's raincoat soaked quite red with his blood.  But did she really do it?  Only Miss Silver knew for sure.

Just when I think I've really delved into the Golden Age of mystery writing, that I've read a wide array of authors, and met the most important characters in the genre; I realize something very important, I'm only getting started.  Patricia Wentworth and her knitting detective, Miss Silver, have popped up on my radar before.  I'm sure that both Yvette of in so many words... and Bev of My Reader's Block have reviewed her books before.  My first experience with Miss Silver, was a parodied version of her that appeared in Marion Mainwaring's Murder in Pastiche.  It wasn't my favorite book, I normally don't like parodies, but it pushed me in the direction of finally getting to meet the real Miss Silver for myself.

Now that I've met her, I'm feeling a little let down.  I'm not sure if it's the author's writing style, the character herself, or maybe just this book.  I'm pretty sure it's not the style, because it's similar in tone to Agatha Christie and Mary Roberts Rinehart, both of whom I adore.  Nor do I think it's the character of Miss Silver.  In many ways she reminds me of Jane Marple and others of her ilk.  And who doesn't love Jane Marple.  So that leaves me with the book itself leaving me a bit cold, but I'm not really sure that's all that fair either.

The mystery was a pretty standard English murder mystery.  The local lord is found dead in his study, bludgeoned to death with a fireplace poker.  The cast of suspects includes a local woman he was engaged to, a young man who's wife he stole away, and a woman accused of stealing from his family.  The murder victim himself was a jerk to the nth degree,and deserved his fate.  What of Miss Silver, I'm really not sure actually, she was barely in the story.  And there lies my problem with the book.  I'm not really sure who Miss Silver is as a character.  Much like Hercule Poirot in The Mystery of the Blue Train, the main character is rarely on the scene.  Miss Silver does solve the case, I just wish I had got to know her better.

I have one more Miss Silver book waiting to be read, so I'm hoping I have another chance to get to know her.  If not, I'm not sure this will be a series I revisit very much.  Part of what I love about this era in mystery writing are the detectives, they are all strange and eccentric, so I want more character.  If I can't get it from Patricia Wentworth, it's time to move on to those I can get satisfaction from.

Another new mystery author for me. Sounds like an Agatha Christie who dun it!

I hope you enjoy the next book more!!

Another mystery author I'm just now hearing of. Terrific, insightful review! I'll have to see what you think of the next one you read.