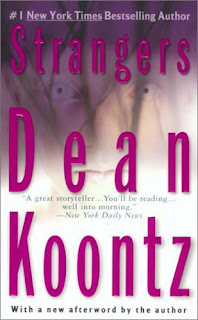 They were strangers.  A handful of people.  From different backgrounds, living in different towns and cities across America, they had nothing in common - except fear.

They were victims.  Cold and stark, an unknown terror gripped their dreams and turned their days into living nightmares.

They were chosen.  And they could not escape.  Deep in the heart of a sprawling desert, a dark memory called out to them, drawing them to the Tranquility Motel - where the terrifying truth was waiting....

Even though it seems that I'm a humongous Dean Koontz fan, especially since I just reviewed Watchers, I'm really not.  There have been only four of his books that I really loved and a few others that I thought were okay.  Strangers, which I first read as a teenager, was one of those four.

Of all his books, I always thought this one would make the perfect movie.  It has numerous characters living their separate lives until they start experiencing life altering personality shifts, some terrifying others more benign but still troubling.  Dominick Corvaisis, a newly published author, finds himself waking up in terror.  He hides behind the furnace in his home, often times taking weapons with him.  Dr. Ginger Weiss, an up and coming cardiac surgeon is experiencing strange blackouts that has her running in a blind panic from the most benign objects.  Ernie Block, an ex Marine, finds himself so scared of the dark that he cringes every time the door to the motel office opens after nightfall.  Father Brendan Cronin loses his faith in God as he starts to heal people with the touch of his hands.  Jack Twist, a former soldier and master thief, finds himself giving away all his ill gotten gains because the sense of thrill has gone.  I can even picture very specific actors in the roles as they bring the terror to life on the screen.

As their situations start to spiral out of control a few of them receive pictures of strangers hooked up to machines while laying in an almost catatonic state.  As they slowly start to put the pieces together, they are drawn back to the Tranquility Motel in Elko County, Nevada.  They, along with a few others, all stayed there for what they thought were a few days of relaxation.  Little do they know that the real memories of those few days are forcing themselves to the surface and are about to change not only their lives, but the future of the entire planet.

This book, and the movie I picture in my head every time I read it, are perfect fodder for everyone who believes the government loves a good cover up.  When something so amazing and life altering happens in that small dessert community, the government decides that the public is not ready for the truth.  So they cover it up, wiping the memories of all those who witnessed it, hiding the truth for as long as they can.  Some elements are even ready to kill to protect it.  This secret though is so big that the truth is driving the witnesses crazy as their false memories start to crumble away.

This is a brilliant mixture of horror, science fiction, and suspense.  Dean Koontz blends all three genres into a story that makes me want to become a believer.  He does it by giving us characters that though not perfect are likable.  I care about what happens to them, especially when I see actors like Sarah Michelle Gellar taking the roll of Sandy, Meryl Streep playing Ernie's wife Faye, or Brad Pitt playing Dominick.  I want their fears to end and for them to discover what happened to them.

Another good one from back in the day (meaning when I was still young...LOL). This one, Watchers and Shadowfires were all good, but I think my favorite from the time period was Phantoms. I still remember how I felt while reading that book...scared s***less!

We are going to be reading horror next on TuesBookTalk. I have a poll up and Koontz's new one, What the Night Knows is on the poll. It's supposed to be really good. Hope you'll stop by and vote...and join us for the chat. We miss you. =O(

Oh, I'm picking this up. I loved his other book I loved was Watchers.

This sounds like a good one, but I don't think I could read it while Carl is out of town!

Enjoyed your review! Thought I had read all of Koontz's books, but this one doesn't sound familiar. You're right, it counds like it would make a great movie!

This is one I don't think I've read. Good review, Ryan.

I need to re-read this one; it's on my keeper shelves, but I've almost forgotten much of it (it's been that long)

I loved Strangers as well - definitely one of Dean's best. I also find Dean Koontz books comforting - even when they're scary as the heros are always people I want to meet!