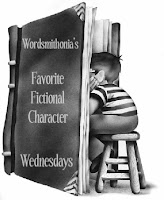 I've been reading a lot of mysteries lately and recently started (almost finished) my first Sherlock Holmes book.  Naturally since I'm highlighting my favorite puppets/muppets this month, it seemed logical to introduce you to the "World's Greatest Detective", Sherlock Hemlock. 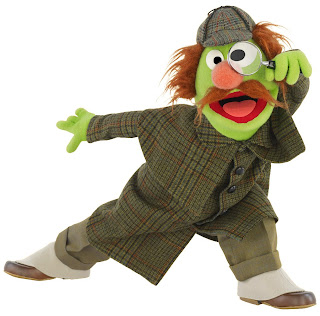 My first memory of the great detective, Sherlock Hemlock, was a humdinger of a case.  Poor Ernie, who had lost his lunchbox earlier in the day, finds it sitting on a ledge.  His relief fades into horror when he opens it up and discovers that half of his chicken salad sandwich has already been consumed by a nefarious culprit.  Luckily for Ernie, Sherlock Hemlock shows up on the scene to save the day.  Using various clues and Ernie's deductive reasoning, Sherlock accepts Ernie's solution.  It was Sherlock who ate the sandwich.

No you may be saying to yourself, "this is just the silliest thing in the world."  You would be right, but it was supposed to be silly.  As a kid I loved the idea of a egocentric detective who can't solve anything for himself but is always willing to take the credit.  The fact that he is the guilty party most of the time made it all that much funnier to me.

The best part is that Sherlock Hemlock wasn't just the "World's Greatest Detective", he also made a great TV host.  Luckily the folks at Sesame Street made Sherlock the host of  "Mysterious Theater".  Much like the great Vincent Price before him, Sherlock hosted stories about great mysteries.  He was often times joined by his dog Watson.  Now much like Ernie before him, Watson would often times solve the case way before Sherlock would.  It's that ability to solve but not solve mysteries that I loved so much about him.  He helped a budding mystery lover discover humour in what was normally a tragic genre.

I've been meaning to read some Sherlock Holmes but haven't gotten around to it yet. I had started listening to a Sherlock Holmes audio book but it didn't really work out for me, and afterwards I forgot about my intention to actually read the book. Thanks for reminding me!

I love the remembrances of Sesame Street. For some reason my children never really took to the show, but I recall it fondly.

His name cracks me up. Sherlock Hemlock. HA!