The Samaritan by Fred Venturini 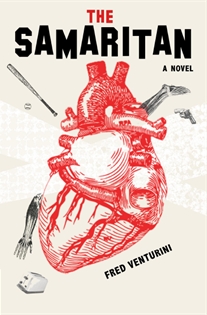 Dale Sampson is a nobody. A small town geek who lives in the shadow of his best friend, the high school baseball star, it takes him years to even gather the courage to actually talk to a girl. It doesn’t go well. Then, just when he thinks there’s a glimmer of hope for his love life, he loses everything.

When Dale runs into the twin sister of the girl he loved and lost, he finds his calling–he will become a samaritan. Determined to rescue her from a violent marriage, and redeem himself in the process, he decides to use the only “weapon” he has–besides a toaster. His weapon, the inexplicable ability to regenerate injured body parts, leads him to fame and fortune as the star of a blockbuster TV reality show where he learns that being The Samaritan is a heartbreaking affair. Especially when the one person you want to save doesn’t want saving.

I finished this book a few days ago and I'm still not sure what to make of it.  Other than most of the crappy music that comes out these days, there isn't much that makes me feel old.  I mean I'm only 35, 36 in August, so other than the occasional backache, there isn't much that does it to me.  This book though, made me feel ancient.

The entire time I was reading, which I did enjoy, I felt like there was something I just wasn't getting.  I don't feel like that very often so when I do, I feel as if I'm either too old to get it, or just not smart enough to understand the point behind the story.  It's not even that long of a book, less than 200 hundred pages, I was that I think the author had a point of view he was trying to get across, and I missed it.

Dale is one of those characters that you don't like from the get go, but you still end up siding with.  He's a longer, mainly because of his own issues, so his people skills suck.  In his defense, he does have a horrific experience to deal with, one that I'm not sure many people would be able to get over, which causes him to be even more messed up in the head.  Between his natural inclination and that night in high school, Dale is a deeply damaged individual.  It's that damage that sucks you into his life and sort of makes you care for him, despite your first impression of him.

After graduation, he sort of floats through life without putting any effort into it at all.  That chance encounter with the twin sister of his lost love though, sends him into a tailspin.  He starts stalking her, beating up her abusive husband, and convincing himself that he can save her.  Who the hell cares that she had no desire to be saved.  Incident after incident, some of them fairly violent, leads him down the road of exploiting his ability to regrow almost any body part.  An ability he discovered after the happening in high school.  It's through that exploitation that everything comes to a head and Dale is forced to grow up, even if it's only a little bit.

This is where I feel as if the book had a message to get across to the reader.  It's here, when Dale is at his most delusional, that I feel the author was tyring to get a message across.  I'm still not sure what that message was, for that matter I can't even tell you there was a message.  This is the section of the book, for me, that everything started to go over my head.  Not in comprehension of the story, because I understood that.  I knew what was happening, who was doing it, and their motivations for doing it.  What I didn't understand, was the "Why" these things were happening.  I didn't get the point of the book, what the author was trying to express.  Maybe I'm looking for something that wasn't there.  Maybe the book was just supposed to be a fun read.  If that's the case, the book was terrific.  If not, then I'm sorry to say I missed it somehow and I probably won't look for it anytime soon.

I would like to thank Lisa of TLC Book Tours for the opportunity to read and review this book.  You can find out more about the author and other opinions on this by visiting the tour page.
Posted by Ryan at 8:09 AM

I'm not sure if I want to read a book that makes me feel older than I do already...LOL! Remember, I've got 7 years on you, my friend. Let's talk about backaches, shall we? =O)

I'm intrigued by the growing back body parts element, but I'm not sure this is the book for me either. Glad you at least had fun with it!

I was thrown off by the cover and then your review makes me think this is just not the one for me.

If the book made you feel old at 35, just think what it would do to my 52 year old self.

Hm... I don't know abou this one. Don't think it was for me. I think I'd find it being very frustrating not knowing if there was a message or not. At least you had fun! Thanks for the great review!

When I first heard about this book I thought it sounded interesting, and I considered giving it a try. But after reading your review I think I'll probably pass. Books in which the protagonists just keeps spiraling downwards depress me, and it sounds that like that is what happens here.

Thanks for the thoughtful review. As the author, I can let the cat out of the bag and tell you I wasn't really trying to intentionally send a message to the reader. I always try to create a character, and then stay true to them instead of shackling them with plot or trying to Trojan horse a reader.

I think Dale has a rough life, and for the longest time, I wasn't sure if he'd make it out OK. But for the most part, he found a purpose and some motivation and follows it to its interminable end, and while the end doesn't leave him basking in rainbows and gooey goodness, I still think that he ends up better than he started off.

I really appreciate you taking the time to read and review the novel. If anyone is brave enough to check it out, do find me on Facebook or my website, I'd love to know what you think of it.

I do like the sound of the story to this but what a shame it didn't really follow through for you and you oculdn't connect with it enough. I'm sure it's nothing to do with your age, Ry. ;-) Sometimes books are missing that *something*.

Hey Ryan, thanks for the review. I'm sorry this one didn't work for you; I remember how excited you were initially to review it! But I'm glad you found it to be a fun read. Thanks so much for being on the tour. We really appreciate it!