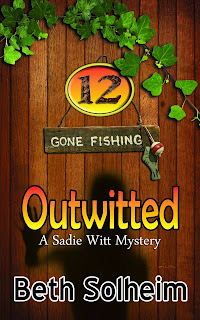 The Witt's End Resort in Northern Minnesota will never be the same when Sadie Witt assumes the role of funeral director's helper after the untimely murder of the previous assistant.  After skeletal remains are discovered under Cabin 12, Sadie and her sister set out to solve a murder and reveal a secret that ties a prominent community member to a notorious crime operation.

Sadie Witt has to be on of the most interesting characters I've read about in a long time.  She's a 64 year old who dresses like a 19 year old with bad taste.  She wears short skirts and tight shirts in loud colors and animal prints.  She dyes her hair, almost daily, with various colors that never existed naturally.  She has a tattoo of an asp on her belly and she has no problem trying to pick up men.  The fact that she sees dead people and is charged with helping them cross over, is just the frosting on the cake.  She's loud, obnoxious, just a little trashy, and the best thing about the book.

The mystery/storyline itself is a little busy, almost too much going on.  It's starts off when two different spirits show up not knowing they are dead or in need of help.  Sadie and her young apprentice are kept rather busy trying to help them out and keep them on the right path.  That storyline is interrupted by the return of the funeral director's ex husband, their son is Sadie's apprentice.  He's a deadbeat drunk that is getting mixed up with the wrong people.  Those wrong people are involved in a baby stealing/adoption scheme that involves the local judge.  Add in the dead body found under the cabin, it just happens to be related to one of the spirits, and Sadie is kept awfully busy.  I'm not even going to mention the dating site that Sadie hooked her sister up on and the two men, one hiding a secret that shows up.

Now that I've finished the book, I'm really thinking that I should have read the first book in the series before I read this one.  I really enjoyed this one but there was so many references back to the first book that I felt lost at times.  Couple that with all the different plot points and there were moments I wasn't sure what was going on.  Despite the occasional confusion, I loved the characters and had a lot of fun.

What a wacky tale! The author is from my neck of the woods I guess. I remember when the first one came out.

That's why I have such a hard time reading out of order!! this sounds like a fun series!

Sounds interesting. Sadie reminds me of Lula in Janet Evanovick's Stephanie Plum series for her clothes and hair, not the age and being able to see dead people part!