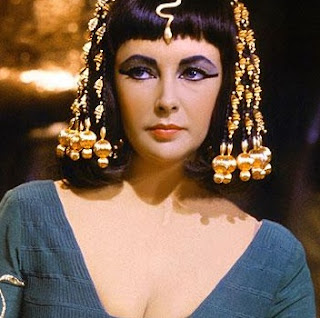 I fell in love with Elizabeth Taylor the first time I saw the movie Cleopatra.  I was in 5th grade and the movie came on TV.  Why we watched it, I don't remember.  I think it was one of my moms favorite movies and for whatever reason I watched it with her.  All I remember was how beautiful she was and how cool the naval battle was.  I've been a sucker for that movie ever since.
Once I was in college I saw Who's Afraid of Virginia Woolf?, and I fell in love with her all over again.  This time it was for her amazing ability to bring a character to life and make her audience forget the actress.  She was brilliant in that movie and just about everything else I have ever seen her in, including The Flintstones movie.  If you have never seen Who's Afraid of Virginia Woolf? watch this clip and you will understand what made me respect her so much.
What I really respect her for though is her activism on behalf of HIV/AIDS awareness and research.  When most of this country was running away out of fear, she was one of the few outspoken public figures trying to give a voice to those who were being stricken down by the disease.  She helped to found amfAR,  the American Foundation for AIDS Research and started her own foundation.  She testified against the ban of allowing HIV/AIDS positive people from even entering the United States and she never stopped speaking out on a cause she felt so passionately about.
She was a brilliant actress and an even stronger voice for those who were deprived of one.  She will be missed by millions, and I am one of them.
Posted by Ryan at 10:41 PM

When I read the news on Facebook this morning, I cried and cried. She really was one of my favorites. I loved Cleopatra too. Did you see my tribute post from yesterday?

I sure will miss her...as I know many others will as well. =O(

I was so sad to see she died. My husband and I actually met her when we were dating. I was trying to figure out when it was and I think it was in 1978, when you were a mere babe in diapers.

I absolutely loved her in 'Taming of the Shrew' and 'Cat on a Hot Tin Roof'....I must look up her other movies. She was so iconic, beautiful and graceful. She was also a great humanitarian. She will be missed!

Another icon gone. What a sad day yesterday. I thought she was one of the most beautiful and talented women of all time.

She was unique. An amazing woman who lived life on her own terms. She made the most of it, that's for sure. We shall not see her like again. I will miss her. Hard to believe there's no Elizabeth Taylor in the world anymore.

Well, she lives on in her movies.

I agree. She will be missed.

I loved her in Cat on a Hot Tin Roof. I saw Who's Afraid of Virgina Wolf at the wrong time in my life and seeing all the fighting and avoidance of reality just made me cry. I've never given it a second try because it just reminds me of where I was at that time.

What a lovely tribute! She will be sorely missed, as she was one of a kind.

I was so shocked, no that's not the right word. I knew she was having troubles, but still when I hear of an amazing actress (or actor) like this passing its still so hard. She was one amazing actress and truly stunning. I remember seeing her in this movie. Beauty at it's best. :)