The Adventures of Sherlock Holmes by Sir Arthur Conan Doyle 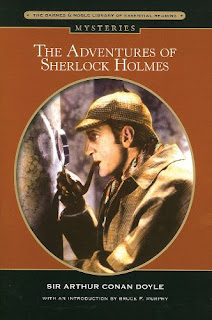 As much as I love mysteries, I have never read any Sherlock Holmes book before this one.  Quite honestly, the only reason I picked this on up was because the Friends of the Library Book Store had a hardcover copy for $1.  Otherwise I would have lived my life quite well without reading a Sherlock Holmes story.

I think my aversion to him, at least up till now, has been partly to do with my experience with Hercule Poirot.  Both of them are arrogant, egotistical, and slightly mental at times.  I have a hard enough time reading the Poirot stories, I didn't want to have to deal with another detective that pontificates so much that it gives me a headache.  After reading this collection of stories, the first collection to be published, I discovered that while they may be alike in many ways, they are refreshingly different.  Sherlock carries himself in such a way that his egotism doesn't force those around him to suffer.  He's brilliant and he knows it, he is just a tad bit more gentle with showing it off.  It's all in the tone the authors chose to use and I for one now prefer Sherlock over Poirot.

I think it also has a large part to do with how prevalent Sherlock Holmes is in our culture.  You don't have to ever read a book or short story to know who he is.  Admittedly I felt that I already knew him so what was the point of reading about him.  It's not a fair way to pick your reading material but with so much out there, why wouldn't you want to read about characters that would be completely new to you.  I'm glad that I can honestly say that I do know who Sherlock Holmes is now, and I can't wait until I get to know him better.

The Adventures of Sherlock Holmes is a collection of 12 short stories originally published in magazine form between 1891 and 1892.  They were published in book form in 1892, so not a very long wait.  I'm only ashamed that it took me until 2011 to give them a chance.

What I loved about this collection is that not all of them deal with an actual punishable crime.  "The Man With the Twisted Lip" is a case that starts off with the promise of murder or kidnapping as the minimum.  Instead it's a case involving identity and not wishing to expose a family to shame or humiliation.  There is absolutely no crime committed.  The best part for me though is that Holmes doesn't explain how he figured this one out.  Instead the author gives the reader the clues and leaves it to them to figure out how the detective figured it all out.  "A Scandal in Bohemia" gives us the tale of a king who fell in love and had an affair with an accomplished actress.  Now that he is forced to marry someone else he needs to get back all proof of the affair from the rightly angry actress.  This is the story that introduces the world to Irene Adler, the only woman to ever get the best of Sherlock Holmes.  It is the first story in the collection and served as a wonderful introduction into how Sherlock's brain works.

Now there are actual crimes committed in these stories as well.  Bank robbery, murder, jewel robbery, and counterfeiting are some of the actions taken by the desperate criminals featured in these stories.  Even these, normally mundane crimes, are given a new twist that made me feel as if I was just discovering the crimes for the very first time.  In "The Adventure of the Engineers Thumb" a young hydraulic engineer, Victor Hatherley, is hired to fix a problem.  His client's hydraulic press is not working as it should and it needs to be fixed as soon as possible.  The client is willing to pay an overly large amount of money and the job is located out in the country so despite his misgivings, he agrees to take the job.  What he encounters when he gets there is more than he bargained for.  His clients are counterfeiters who plan on killing him once they are done.  Luckily he manages to escape, losing his thumb in the process.  On arriving back in tow, he encounters Dr. Watson who patches the wound and takes him to Sherlock Holmes.  From there the case is left in Holmes' capable hands and he quickly solves the case though the bad guys get away.  The atmospherics of the story allowed me to get sucked in from the beginning and the by the end of the story I felt as if I had watched a wonderful movie that would not leave my head.

As a collection I felt the stories worked well together and felt as if they were a cohesive example of Sherlock Holmes and his abilities.  I will have to admit to being hooked on him now so don't be surprised if you start seeing more reviews featuring Sir Arthur Conan Doyle's most famous creation.  By the way, in case I didn't mention it before, if you click on the story titles it will allow you to read full text versions of them.

I also have this book which I bought at a library sale. I haven't read it yet, but I will....

I love Sherlock. I watch every movie/TV show that I can. I loved the newest Sherlock movie with Robert Downey Jr. I'm particularly fond of the BBC series that starred Jeremy Brett as Sherlock and there was a 2002 remake of The Hound of the Baskervilles (my favorite Sherlock story), which starred Richard Roxburgh as Sherlock, that I liked really well. Ian Hart played Watson in this version and I liked his protrayal.

Great review and thanks for reminding me. I think ole Sherlock just inched a little closer to the top of my TBR pile. =O)

When we went to see the Sherlock Holmes movie, my mother was shocked that I've never read any of the books since she loved them as a child. I've been curious about them ever since then. This sounds like a good book to start with.

It's so funny that you posted this today. First of all, I love Holmes, but my husband was talking about Holmes and Watson last night and I had to "hush" him. I know that he's never actually read the stories, and he was driving me crazy with his based on the movie comments.

I am a Sherlock Holmes fiend, Ryan. So welcome to the club! I was watching Jeremy Brett as Holmes on Netflix Instant Watch just a couple of days ago. And I have HOUND OF THE BASKERVILLES being mailed directly to me as we speak. Just felt like watching it again. The one with Basil Rathbone. Long live HOLMES!!!

In sixth grade I recall reading Hound of the Baskervilles, but I don't really recall much else about the book or Holmes. I am a bit ashamed to say I've tried to watch the Robert Downey Jr. film version and fell asleep both times. I saw enough of it to mostly enjoy it, but it didn't keep me awake for some reason! Glad you enjoyed your find!

Love Holmes! I reread the stories every now and again and love watching Jeremy Brett. I don't think anyone will ever be better as Holmes (but I'm willing to be convinced).

Nice! I recently got a copy of this book after loving the Masterpiece Mystery series--I thought perhaps it was time for me to read the original. Now it sits on my tbr pile, waiting for me to have time to read it.

YAY for Holmes! I'm so glad you enjoyed him - he's one of my favorite characters to follow. Definitely try some of the other collections when you get a chance.

Sorry I'm so late commenting on this one ... I've been a real slacker when it comes to commenting lately, even on posts I've really enjoyed. :(

Glad to know that you liked the Sherlock Holmes canon.

I have been a lifelong Sherlockian and just love the original stories.