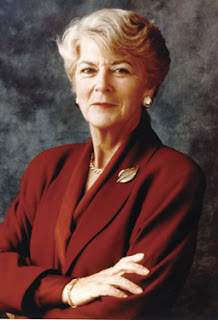 We lost a true political pioneer yesterday to multiple myeloma, a form of blood cancer.  Geraldine Ferraro was a respected prosecutor when she decided to run for congress in 1978.  She quickly made a name for herself by championing legislation to bring equality in the workplace for women.

In 1984 she was chosen by Walter Mondale to be his Vice Presidential nominee.  She became the first woman to ever be on a major political party ticket, in this case the Democrat party.  Her nomination energized the campaign but they ended up losing to the incumbent president at the time.

The excitement lasted far beyond the campaign.  Her candidacy gave women a living example of what can be achieved in the political sphere.  It was a trailblazing that has benefited many.  The careers of Hillary Clinton, Nancy Pelosi, and countless others owe just a tiny bit of their success to Geraldine Ferraro and what she accomplished.
Posted by Ryan at 1:11 AM

I recall being in elementary school when she was on the ticket for VP and it was the first time I recall seeing a woman in politics ( I know they must have been there, but that was the first time it registered for me). I know it changed the way I thought about politics and government. Thanks for the post!

Ah, I felt that twinge of sadness yesterday when I saw the news...I admired this woman, and as you said, she charted the journey for many others.

We owe her our admiration and our gratitude.

Thanks for sharing, Ryan.

I couldn't believe she was 75 ... or that she is dead. It just seemed like not-too-far-in-the-past news that she was the 1st female VP nominee.

That is sad.... thanks for this lovely tribute post Ryan.

She was a trailblazer, that's for sure.

Sending sincere sympathies to the family of Ms Ferraro she will be missed. Ferraro was an intelligen¬¬t, articulate¬¬, passionate caring person, a good lawyer, and a forceful politician¬. RIP!

Guess I have to admit I was shocked when I heard this news. I had no idea she was sick. I'll always remember how proud I was for women when she was picked to run as vice-president. It was a big step for women in politics. I will always look at her as a trailblazer. Rest in peace, dear Geraldine.