Read The Qur'an, Not Burn It 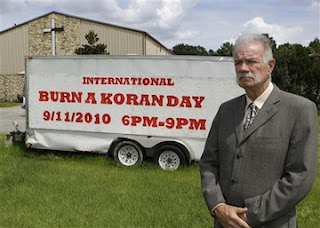 I'm going to totally honest right now by saying that while I've been hearing about this idiot's plans to burn the Qur'an, I really haven't paid that much attention to it.  For those of you who may not know what I'm talking about, the picture is that of Pastor Terry Jones of Dove World Outreach Center, a church of about 50 people.  Pastor Fox and his "followers" feel it's appropriate to burnt he Qur'an, this Saturday in remembrance of Sept. 11.
As a book lover I find the idea of burning any book disgusting and abhorrent.  The destruction of any written word just because you don't like it or not understand it is cowardly, shameful, and just about any other negative adjective I feel like using.  The fact that he is supposedly doing this to remember those killed on that day is a slap in the face to those who died and to this country.  It goes against what this country stands for at it's core and pretends that there were not Muslims in the Twin Towers when they came down.
What does this idiot think will happen in the Muslim world when the news carries pictures of Americans burning the Qur'an.  Does he think that they will embrace our men and women in uniform in the streets of Afghanistan and thank them for it?  Does he not realize that most of the world lives within countries where a government can stop this disgusting public display from happening?  Does he not get that a lot of Muslims will see this and assume that not only the government of the United States but it's citizens condone the vileness of burning a book that is viewed as Holy by over a billion people world wide?
I'm not saying I think the government should step in and stop it and I will defend his right to do it.  What I am saying is that he should feel the moral outrage of a nation and it's people, that sheer public desire should put a stop to this.  I also realize that nothing anyone says is going to stop him from going through with his plans, I just hope he is willing to take responsibility for the damage he is going to cause.
Truthfully, I've never read the Qur'an and while I may have been curious about it in the past, I've never felt a strong urge to read it either.  Well thanks to Pastor Jones I will be reading it in the near future.  I will not let an idiot like him make this country look bad or intolerant.  I just hope that those who are like minded find it within themselves to read the Qur'an and not burn it.  I want to understand it in the way I understand the Bible.  Maybe if those in the Muslim world see more Americans reading the Qur'an and not burning it, we will show them that we really are a nation of religious tolerance and not one of hatred and stupidity.
Posted by Ryan at 2:49 PM

Is this not the same, erm Pastor (?) that goes to military funerals and disrupts them?

What happened to turning the other cheek?

Pricilla, Unfortunately no he isn't. You would be talking about Fred Phelps who I have the displeasure of sharing a state with.

This makes me almost physically sick when I think about it. As a Christian, I do not consider this man in any way a part of extreme love that Jesus exemplified in the Bible - he's what J.K. Rowling calls "the lunatic fringes of her religion." Showing hate in such an ignorant way is going to help any situation. I do follow the quote - "I may not agree with what you have to say, but I will fight to the death for your right to say it." But this idiocy and idiocy like it truly pushes my commitment to that ideal. *takes a breath from ranting*

There are some truly stupid people on this planet.

Let's hope that the world sees this guy for what he is: an ignorant bigot who in no way represents the majority.

Well said, Ryan! I was floored when I heard that he didn't care if he was putting our troops in danger. Excuse me? Be a jerk if you like, but don't do something to deliberately put our soldiers at risk. Pastor Idiot is getting way too much attention, and is behaving in a very un-Christian manner. :(

This was a really well written post. Thanks for sharing! I, too, now have a stronger desire to read the koran. I wonder what it is this man thinks he is hiding by burning the book.

Thank you Ryan for posting this. His desire to do this has outraged me, sickened me and frankly, has broken my heart. I definitely recommend reading the Qur'an if you can. I was gifted a beautiful copy from a childhood friend of mine who is half Saudi Arabian (was born and lived there til she was 9 and moved to Kansas) and half Caucasion, one side of the page is in Arabic and the other side is in English. I have a deep love of religions and cultures (and go figure, I am an Atheist! Ha ha) because I was raised to respect, love and embrace other people's beliefs and cultures. The Qur'an is a beautiful book. Read it. And once again, THANK YO Ufo rposting this!

I saw this on the news earlier and I was appalled. I can't believe that there are people this small-minded in our country...oh, wait a minute...yes I can. As if the Muslim world doesn't hate us enough as it is, let's just add fuel to the fire. Why not? What a dumb a**!

I've owned a copy of the Qur'an for years, but haven't read it. I need to locate it and read it...perhaps during banned books week.

Thank you guys. It's nice to know I'm not alone in my outrage over this guy.

It seems I've lost a follower since I posted this, but I can live with that.

Everyone who believes that banning/burning books is wrong should be outraged by this. It's not ok just because it's a religous book you may not believe it. Burning books of any kind is amoral but this is just disgusting.

Thank you for this post. I think this is disgusting and can't even believe that anyone thinks it is a good idea. I also think, though, that he is only doing it to incite violence and as an act of hate - so I think the government would have the right to stop him. What if people were burning the bible? Wouldn't that be stopped? So why not for another holy book? And yes, it is a huge slap in the face to all those Muslims and their families who died in the crash or to those who helped out afterwards.

The biggest problem is that this pastor is giving a bad name to all of those who are Christians. I would consider him similar to the radical Muslims but not too the exact extreme. Hate is is awful no matter which way it is sliced and serves no greater good whatsoever.

I agree with you Ryan, reading the Koran would be a good idea. I am currently reading my Bible in complete and am finding great truths, etc within the pages. While, I am curious about the Koran simply from the standpoint of just wanting a better understanding of Islam, I will admit, I don't think I will be reading it any time soon. I firmly believe in the tenets of Christianity and honestly, I need to focus greater on my Bible (which is a huge book, and takes time). What I think I would like to do though, is learn more about Islam/Muslims from other source besides the Koran, and those sources would be best if they were able to give a full picture and not just heavily slanted one way or another. Does this rambling of mine make any sense?

Ryan- THANK YOU FOR WRITING THIS POST! I was reading an article today in which the writer stated that the pastor was kneeling to "an altar of hate." And the scary fact is, he and people like him, don't even know it. They feel righteous and feel like God is on their side.

People all over the world are already protesting this and even if he does cancel, this so called pastor has already undermined the nation and religion he claims to love.

I heard about this on the news last night. Some people!

Thanks everyone! I appreciate all your comments and they have made me feel sure of myself for posting about this issue.

The good news is that this idiot seems to have finally gotten the point that this isn't such a good idea and has cancelled/postponed the event. Hopefully the damage done isn't too severe that it can't be mended.

I have a feeling, Ryan (and my thanks too, for writing your post)that this guy in Florida is only calling the whole shebang off because he's probably gotten threats. One would hope he finally saw the light of reason, but I doubt it. I think the whole thing backfired on him and the Secretary of Defense's phone call gave him a way out. Jeez, talk about NOT anticipating the consequences of your actions. What's that quote? "Wherever they first burn books, they'll eventually burn humans."