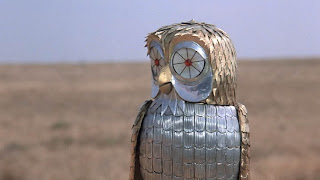 This post is inspired by a conversation I had with a coworker the other day.  I'm a huge fan of the original Clash of the Titans movie but have not seen the remake, so when my coworker informed me of the deplorable way in which Bubo the owl made of brass and iron, who saved the day in the first movie, was treated in the remake I was furious.  How can they treat such a wonderfully adorable character with a heart of gold in such a offhanded way.  It's cold and callous and should never have happened, so this post is dedicated to the brave metal owl who only wanted to fit in and save the day.
For those of you who have no frickin clue of what I'm talking about I'll give you a brief rundown.  In the movie Perseus loses his magic helm in a fight with Calibos and Zeus orders Athena to send him her beloved  magic owl Bubo as a replacement.  Now naturally Athena didn't want to part with him so with the help of Hephaestus she creates a duplicate of him made of metal.
He doesn't show up until Perseus is on his way to meet the Stygian Witches and Bubo immediately shows him the way to the caves, and proves why he is such a valuable asset.  Bubo is able to save the day two more times in the movie, the first is when he save Pegasus from Calibos' men which allows Pegasus to fly to Perseus and help him battle the Kraken.  The second time is when Bubo, without thinking of the danger to himself, attacks the Kraken as a distraction and is swatted into the ocean for his bravery.  Heroically he returns from his watery grave in time to snatch the head of Medusa, which Perseus had dropped, and returns it in time for Perseus to turn the Kraken to stone.
Now I ask you does this sound like a character that should have been so horribly wronged in the remake?  I don't think so, instead they should have made a movie that respected the bravery and contributions that Bubo showed in the first one.  What they need to do now is make a movie from Bubo's perspective.  He should be the hero, not Perseus.
Posted by Ryan at 1:18 PM

I'm actually with Michelle, I haven't seen either. I made a deal with my husband though that the next time we get a movie it'll be the remake.

I recently watched the new movie and I liked it, but I'm still a loyal fan of the original. I just think the original told the story better. The new one focused too much on the special effects. It was shocking how they treated Bubo. I have a special love for Athena. I dressed up as her for Halloween several years ago and I had a beanie baby owl tied to my arm! LOL! Great pick this week. I really need to start doing this again. I'm so behind right now...maybe when I get caught up!

The original movie is one of my all-time favorites. I've even got Kiddo loving it. We want to see the remake but now that I hear this about Bubo (and also the negative reviews of the movie in general) I'm sort of dreading it...