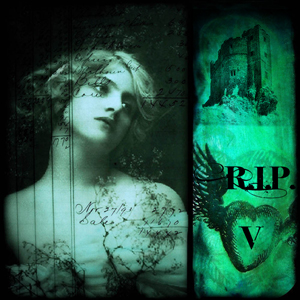 I really didn't need to sign on to anymore challenges this year but since the R.I.P. Challenge is all about scary and mysterious books I couldn't resist.  It's not like I don't already start delving into them this time of year anyway.  For those of you not familiar with this challenge R.I.P. stands for R.eaders I.mbibing P.eril and is hosted by Carl of Stainless Steel Droppings and this is the 5th time to host it.  The challenge runs from Sept. 1st through Oct. 31st of 2010.

The rules seem to be pretty easy and there is a level for people who only want to read one book.  I on the other hand am going for Peril The First level.  All I have to do is read 4 books that can fall into the broad categories of Mystery, Suspense, Thriller, Dark Fantasy, Gothic, Horror, or Supernatural.  I will probably read a lot more than that but we'll see.  I may even do the Short Story Peril, which should be self explanatory.

This year he even added a Peril On The Screen segment and since I love horror movies and that's about all I watch in October, I'm psyched for this one.  Not that I needed an excuse or anything.

Now I don't normally list the books I may end up reading for the challenge but since I have the ones I want pretty much in mind I though I would share a few of the potential choices.
The Thief of Always by Clive Barker
Once... by James Herbert
The Sentinel by Jeffrey Konvitz
Bless The Child by Cathy Cash Spellman
Bound In Blood by David Thomas Lord
Desmond by Ulysses G. Dietz
Day Watch by Sergei Lukyanenko
The Terror by Dan Simmons
Black Hills by Dan Simmons
The Neighbors by Carol Smith
The Haunting of Hill House by Shirley Jackson
Various Agatha Christie books
Some of the books I may read for the Short Story Peril:
Great Tales And Poems of Edgar Allan Poe
There Once Lived A Woman Who Tried To Kill Her Neighbor's Baby by Ludmilla Petrushevskaya
Midnight Graffiti edited by Jessica Horstring and James Van Hise
Nightmares & Dreamscapes by Stephen King
The movies are too numerous to list but either of the above lists can change at anytime.
Posted by Ryan at 8:51 PM

Hey, Wichita! You're right close, I'm in the Kansas City, MO area (Blue Springs). Glad to have you along for the ride this year.

I love so many shows and films based on Agatha Christie stories but have only actually "read" a few. And I put that in quotes because they have all been (quite excellent) audio versions of her books. I should add another of those to my list for this year.

I'm so glad I talked you into joining this challenge. Our Halloween Horror pick for TuesBookTalk will fit right in, even if you don't have it listed, you can always add it. I'm especially looking forward to the movie portion. I think I'm going to see either Machete or The Last Exorcism this weekend!

I will have to cheer you on and live through your reviews. I shudder at the thought of this challenge. Me and scary do not mix well!

Man, you all are doing this one again! I haven't decided yet. I like the whole Peril on the Screen thing though. That's my life in October. All I do is watch scary movies.

You should definitely join in this year, even if it isn't for the reading part and is only for The Peril of the Screen. We would love to have you be a part of it.

I couldn't resist joining this one and will be posting my tentative list tomorrow. I figure I've done good avoiding signing up for too many this year. I deserve this one last fling in 2010.

You've got some great books listed. The Terror is one book I've been really want to read.

Good luck with the challenge, Ryan, and have fun!

I normally don't make lists either because the minute I do I never seem to want to read the books on it anymore... It's something weird about me. :) Enjoy your reading!