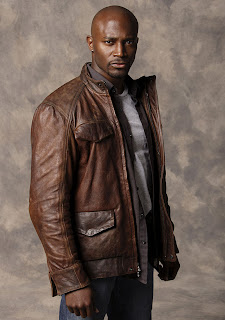 I know I'm probably going to be the only one who even knows about this character, but that's fine, I can live with that.  Detective Brett Hopper, played by the gorgeous Taye Diggs, was the lead character in the short lived TV show, "Day Break".  The show aired for only a few episodes in 2006, but I was hooked right away.  Luckily they wrapped up the storyline for the DVD release which has 13 episodes.

What I like about Det. Hopper, other than how fine he is, is how resilient he is in the face of the bizzaro world he is forced to deal with.  One day he wakes up and discovers that he is being set up for the murder of a state attorney.  He is forced to go on the run and watch as his girlfriend and family are targeted by the bad guys.  The problem is, he's forced to relive the day over and over again until he finds out what is going on.  Over the subsequent days he sees his girlfriend killed, his partner killed, his sister kidnapped, and almost every other thing that can ruin your day.  He's almost killed a few times and when he wakes up he has the wounds and scars to prove it.

Thankfully when he wakes up he is able to remember everything that happened the "day" before and he's able to correct the mistakes he's made.  How many times can you think you know someone only to have them do something that looks like a betrayal? He has his limits pushed to the edge, he doesn't know who to trust, and all he wants to do is save his girl. For most people this would drive them crazy, how many times can you watch your loved ones die without it driving you mad?  But Hopper finds the inner strength to continue on because he realizes that's the only way to make his nightmare end.
Posted by Ryan at 2:51 AM

I have to agree with you, he is a delightful chocolate hotty.

Sounds like a show I'd like, Ryan. A kind of suspense thriller version of GROUNDHOG DAY. I wonder if Netflix will have it.

You know I think I heard of this series, but I never got to see it. Sounds like a very strong character for such a trying time. Great pick.