The Protector's War by S.M. Stirling 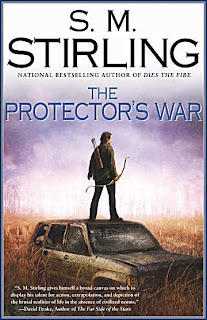 It's been eight years since the Change rendered technology inoperable across the globe.  Rising form the ashes of the computer and industrial ages is a brave new world.  Survivors have banded together in tribal communities, committed to rebuilding society.

There isn't a lot I can tell you about this book without giving a lot of the plot twists away, so this review will be short of details.  The book starts eight years after the Change and life in the Willamette Valley is teetering on the edge of war. The militarized Bearkillers led by Mike Havel and the mystical Clan Mackenzie headed by Juniper Mackenzie have managed to make a place in the valley for their respective societies.

The two groups have strong ties binding them together to oppose the Protectorate ruled by Norman Arminger.  All three groups now have heirs that they are wanting to protect and build inheritances for.  Together our heroes with the help of their allies, the warrior monks of Mt. Angel and the loose federation of ranchers east of the Cascades, are trying to keep Arminger's reach from growing even larger.

This is a solid second installment in the series and the focus, outside of the coming war, is on the family.  What family dynamics mean in a society where birthright is once again becoming an issue.  Who will inherit the positions of power when the parents start to die off?  What happens when titles and positions are once again important distinctions in society?  I don't want you to think that this is the only aspect of family that is explored in this book because it's not.  I don't think there is any aspect that isn't involved in this book and the interpersonal dynamics are fascinating to read.

The other aspect of the book I enjoyed was getting to see how other regions of the world have survived the Change.  We get to see glimpses in England and small glances at the rest of Europe as well as Australia and New Zealand.  Reading even a little bit of how the rest of the world manages to survive when everything they knew was turned on it's head was a treat that I was not expecting to see.

So for any of you who end up reading the first book in the series, Dies The Fire, you are in for an even better treat with this one.
Posted by Ryan at 12:09 PM

Sp the professor turns into the bad guy, more or less. Interesting.

I really like the sound of this series. I may have to look it up when Marc needs something new to read! Just my humble opinion...I like how you reviewed this Ryan...just enough to make us interested and want to read it!!

Oh you devil! Now I am desperate to read this series..and I have a buying ban going.(I guess that's over now)

Ryan, I read this series a while ago and then stopped, it looks like I should pick it up again.
Thanks for the great review
Deb