A Meeting At Corvallis by S.M. Stirling 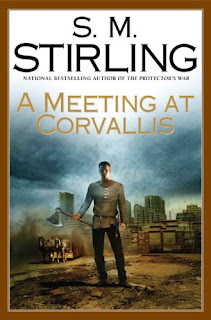 It's been 10 years since the Change and Michael Havel and Juniper Mackenzie are still leading their groups of survivors in Western Oregon.  War with Norman Arminger hasn't started yet due to some ingenious moves by Clan Mackenzie, but it's only a matter of time before these groups will meet in battle and change their lives forever.

Because of various tactical planning by Juniper and her Clan, war with the Portland Protectorate Association hasn't quite broken out.  Tensions though are rising and it's only a matter of time before Norman Arminger and his even more dangerous wife, the Lady Sandra Arminger, figure out a way to ride roughshod over the obstacles in the way.

This is a tense third book in the series and one that I found myself being unable to put down.  The author is fantastic at creating completely believable worlds for his characters to inhabit.  It's those characters that drives this story.  This book, along with the two previous books, are glued together by the fantastic people who inhabit them.  It's their stories that will keep you coming back for more.  Now obviously, like most epic fantasy books, there is a large cast of characters running throughout the books so far.  Characters you will love and love to hate.  Lucky for us, they are all believable and well rounded.  Even the "evil" characters come across as complex individuals who have their own reasons for being the way they are.

There are some brilliant supporting characters in these books, I may have not mentioned them before but they are well worth getting to know.  There is Mike's sister-in-law who's so into Tolkien that she, along with Juniper's deaf daughter, has started her own version of The Dunedain Rangers.  Juniper's son Rudi and Mathilda Arminger,the daughter of Lord Norman and Lady Sandra, are slowly growing into their own personalities and both are deeply enjoyable.  I could go on and on but there are so many wonderful characters in these books that I could take the next twenty paragraphs and never get through them all.

One warning though, and this started in the previous books, characters are never safe.  Even the ones you have grown to love are in danger of being killed off.  It's the one aspect of epic fantasy that when encountered for the first time, may take you by surprise.  The more you read and get into the story itself, you realize those deaths are needed to propel the story.  In a world turned upside down, people will die, including the good guys.

The meeting in Corvallis, which is an independent city state that is run by the old faculty of the University, that's in the title doesn't happen until the end of the book, but by then you are welcoming it.  It's a calming down of sorts that needs to happen but the journey towards that meeting is a wild ride that will leave you breathless.
Posted by Ryan at 10:54 PM

You are doing a great job at selling this series. Sounds like one to get sucked into.

In a way this reminds me of the short-lived TV series "Jericho" - it definitely sounds like something I'd enjoy!